MJJCommunity is a Michael Jackson Fan Club that is committed to preserving Michael’s legacy. MJJC is focused on maintaining integrity and respect for Michael who although was adored by millions of fans, Michael was a compassionate, selfless, humble and honourable human being. Gaz is resolute in keeping the community operating within these guidelines and is able to do so with the help of the MJJC Staff. Michael was aware of this as apparently, he secretly lurked and enjoyed how fans marvelled over anything Michael Jackson did.

MJJCommunity was founded in 2007 by Gary Taylor (aka Gaz), who is the sole owner of MJJCommunity. Gaz is a passionate web developer and is a “Dedicated” MJ fan that took an existing Michael Jackson forum and inserted new energy to create a community and a place to connect with other MJ fans from around the world. MJJComunity’s professional website offers many features and information to support Michael’s legacy.

A team of dedicated volunteers who believe in the same values that Michael held close to his heart and soul manages MJJCommunity.

MJJCommunity offers the following to members and visitors:

All the latest news (direct from the source) is discussed in a ‘healthy’ and ‘respectful’ manner. For additional research, several events are stored in the MJJC History vault and offer a historic value.

MJJC Staff members are very passionate in their mission to provide all the latest information and facts about Michael as a gifted artist, humanitarian and human being.

If News is not your interest and you just want to talk about Michael, the man, the music and the dance, Michael Jackson Pictures to keep Michael’s image alive in the hearts of people of all ages around the world. The forum is not exclusive to Michael as you can also find information about the other Jackson family members in the 2300 Jackson street forum. 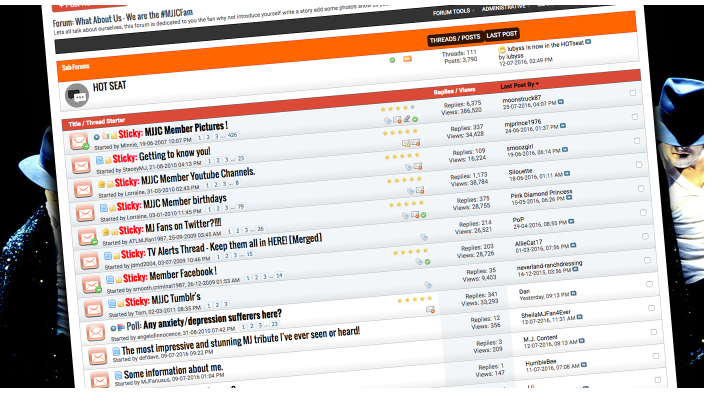 If members do not feel like discussing anything Michael-related at all, there is a place for you at MJJC as well. Members can browse the “The MTV O awards recognised MJJCommunity for “BEST fan site” in 2011. With many congratulations received including the Estate of Michael Jackson MJJCommunity’s focus is to bring the fans together from all over the world to “unite” as brothers and sisters, aka The Army of L.O.V.E which Michael Jackson ‘loved’ as his own children. 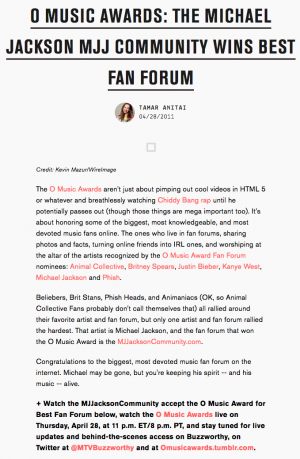 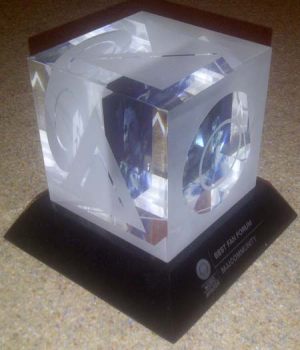 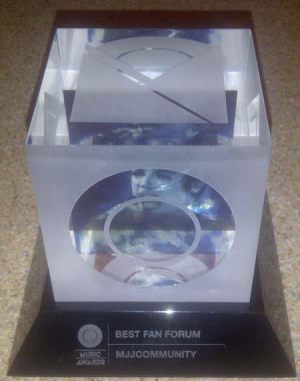 MJJC works to build connections with other fans that are outside the MJJCommunity Forum, through several forms of social media such as Facebook, Twitter, which also helps preserve Michael’s legacy and/or spread L.O.V.E. across the world.

We now also offer an awesome platform where fans come together to chat sing and play music - why not pop along and join in the fun in our Michael Jackson Chat, with full chat Cam and Audio capability. 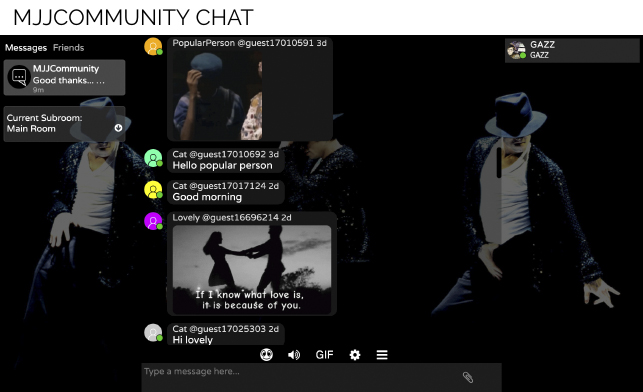 MJJC is the world’s MOST active Michael Jackson fan club, with a total member count of 105.904 (as of July 4, 2013) with 869 of those members currently active each and every day. This number will fluctuate from time to time, especially when there is a Breaking MJ NEWS, a NEW album or DVD released or especially around the anniversary of June 25th or more importantly on his birthday August 29th.

We welcome NEW members who are inspired by Michael’s magic and who have found their way to MJJCommunity.

Michael may no longer be in this world physically; however, his light and L.O.V.E. will continue to live on in us here at MJJCommunity.
Last edited by a moderator: Jul 14, 2022
Click to expand...