Any Believers of The Flying Spaghetti Monster in here?

From the official site:

About
The Church of the Flying Spaghetti Monster, while having existed in secrecy for hundreds of years, only recently came into the mainstream when this letter was published in May 2005.

With millions, if not thousands, of devout worshippers, the Church of the FSM is widely considered a legitimate religion, even by its opponents – mostly fundamentalist Christians, who have accepted that our God has larger balls than theirs.

Some claim that the church is purely a thought experiment, satire, illustrating that Intelligent Design is not science, but rather a pseudoscience manufactured by Christians to push Creationism into public schools. These people are mistaken. The Church of FSM is real, totally legit, and backed by hard science. Anything that comes across as humor or satire is purely coincidental.

Pastafarianism is a real religion.

Most of us do not believe a religion – Christianity, Islam, Pastafarianiasm – requires literal belief in order to provide spiritual enlightenment. That is, we can be part of a community without becoming indoctrinated. There are many levels of belief.

By design, the only dogma allowed in the Church of the Flying Spaghetti Monster is the rejection of dogma. That is, there are no strict rules and regulations, there are no rote rituals and prayers and other nonsense. Every member has a say in what this church is and what it becomes.

To outsiders it makes us hard to define, but here are some general things that can be said about our beliefs:

We believe pirates, the original Pastafarians, were peaceful explorers and it was due to Christian misinformation that they have an image of outcast criminals today
We are fond of beer
Every Friday is a Religious Holiday
We do not take ourselves too seriously
We embrace contradictions (though in that we are hardly unique)
Click to expand...

Q: Is this a joke?
A: It’s not a joke. Elements of our religion are often described as satire and there are many members who do not literally believe our scripture, but this isn’t unusual in religion – it’s only more obvious in the case of our particular religion. A lot of Christians, for example, don’t believe the Bible is literally true – but that doesn’t mean they aren’t True Christians.

If you say Pastafarians must believe in a literal Flying Spaghetti Monster to be True Believers, then you can make a similar argument for Christians. There is a lot of outlandish stuff in the Bible that rational Christians choose to ignore. We do the same with our scripture. This is intentional.

Q: A lot of Pastafarians seem to be anti-religion and/or atheists (why is this?)
A: We’re not anti-religion. This is NOT an atheists club. Anyone and everyone is welcome to join our church including current members of other religions. In addition to the Atheists, Agnostics, and Freethinkers who have joined us, we have a number of Christian (and Muslim, and Hindu and Buddhist …) members and I would love to have more. Note to the religious: You are welcome here.

Let me make this clear: we are not anti-religion, we are anti- crazy nonsense done in the name of religion. There is a big difference. Our ideal is to scrutinize ideas and actions but ignore general labels.
Click to expand...

Anybody else a Pastafarian? I'd love to hear from you guys.

But honestly, it's one of the best and most positive things I've ever come across. I love that people have adopted it into their lives and dress up as pirates and all that, it's just so funny and great!
L

LOL I don't believe in the FSM myself but this reminds me of a video a friend sent me yesterday, about an Evangelical Pastafarian

Of course. I've been a devout worshiper for years.

R'amen, Mikage! Nice to have you here! When were you touched by the noodley appendage?

Are His images allowed to be posted here or is that considered blasphemy?

I don't see why not! I think people would be interested to know what he looks like! 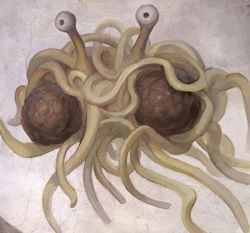 I never heard of the Flying Spaghetti Monster before I came in to this topic. It sounds like something my 4 year old nephew has made up. Just out of curiosity how does one become a pastafarian?

All you have to do is simply believe and have fun. There's no rules, no regulations no anything! You don't have to follow our "scripture" if you don't want to, or dress up as a pirate or agree with everything. It's a purely, open religion.

And 100 percent real just as any other religion is.

I adore this - my brother told me about it and I read up on it online over a whole night - not sure I got any sleep! It's great!

MJsBollywoodGirl7 said:
I never heard of the Flying Spaghetti Monster before I came in to this topic. It sounds like something my 4 year old nephew has made up. Just out of curiosity how does one become a pastafarian?
Click to expand...


Well, as Kindofdisco noted, there aren't any strict rules you have to obey but there are a number of "I'd Really Rather You Didn'ts" (the Pastafarian condiments):

The Condiments of Pastafarianism, also known as the Eight I'd Really Rather You Didn'ts, are the sacred commandments given to Mosey the Pirate captain by Flying Spaghetti Monster Himself.
While brooding atop Mount Salsa because he could not find a Pirate ship, Mosey received some advice from Flying Spaghetti Monster in the form of ten stone tablets. There were originally ten I'd Really Rather You didn'ts, but two were dropped on the way back down the mountain, with eight remaining. This event "partly accounts for Pastafarians' flimsy moral standards." The Flying Spaghetti Monsters commandments address worship of Him, the treatment of people of other faiths, sexual conduct, and nutrition.

By the way, I would appreciate it if someone added "(Non-debate thread for believers only)" to the thread title. Thank you

Comic relief at last. Thank you all! I got depressed a bit by the other believers only thread. Some of these condiments should be adapted by other religions as well.

Actually, those condiments are WAY more relevant that the Bible's. Plus, the FSM looks way more badass than Jesus.
L

AndreyZidane&#8482;;3338819 said:
Actually, those condiments are WAY more relevant that the Bible's. Plus, the FSM looks way more badass than Jesus.
Click to expand...


And I bet His Noodly Goodness has bigger balls too unk:


I mean meatballs, of course.

LindavG said:
And I bet His Noodly Goodness has bigger balls too unk:

MJsBollywoodGirl7 said:
I never heard of the Flying Spaghetti Monster before I came in to this topic. It sounds like something my 4 year old nephew has made up. Just out of curiosity how does one become a pastafarian?
Click to expand...


I believe that being on a low-carb diet might prove to be more of an obstacle in this case.

Also, being a Pastafarian could open new pathways into the exploration of polytheism.
As in: there is so much to be worshipped. The Flying Spaghetti Monster has several wives, the main one being The Flying Linguini Monster. And there are the other followers, I mean, other wives.

Note: This does not imply any gender for the actual Flying Spaghetti Monster, if there ever was a gender to be established. The use of the word 'wives' just seems easier for current humans with anthropomorphic tendencies.

There is much to be explored!

The Flying Spaghetti Monster is also open to discuss other beliefs (they said they're gonna have council real soon!), such as reincarnation. But since the grilling season is upon us, noodle salad will open the debate once more. The council would also like open the debate on concepts such as Heaven- al dente=Nirvana opposing the concept of hell=pasta cooked to death/canned pasta. Your input would be appreciated.

Mediumship, aka 'channeling' of the Flying Spaghetti Monster seems to not only happen frequently, but is very much encouraged.
All it takes is a colander with openings larger than the pasta, and 3 strands that wiggled through indicate a successful channeling!
Last edited: Apr 12, 2011

I love FSM, but Cthulhu owns my soul and would win any battle against FSM. 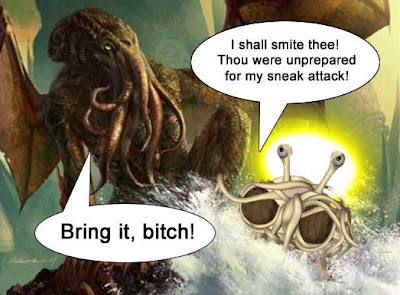 LindavG said:
By the way, I would appreciate it if someone added "(Non-debate thread for believers only)" to the thread title. Thank you
Click to expand...

I was seriously going to put it in the title, but I don't want to tred on too many toes haha!

I'm so glad that so many people here have embraced Pastafarianism!

Sitting here eating some spaghetti for my supper. I have to admit now that I am believer too. Plus from those pictures of him I think he's sort of cute.
L

AndreyZidane&#8482;;3338819 said:
Actually, those condiments are WAY more relevant that the Bible's. Plus, the FSM looks way more badass than Jesus.
Click to expand...

I forgot to add that, unlike other religions, ours is backed up by hard scientific evidence.

According to Pastafarian beliefs, pirates are "absolute divine beings" and the original Pastafarians. Furthermore, Pastafarians believe that pirates' image as "thieves and outcasts" is misinformation spread by Christian theologians in the Middle Ages and by Hare Krishnas. Instead, Pastafarians believe that they were "peace-loving explorers and spreaders of good will" who distributed candy to small children, adding that modern pirates are in no way similar to "the fun-loving buccaneers from history". In addition, Pastafarians believe that ghost pirates are responsible for all of the mysterious lost ships and planes of the Bermuda Triangle. Pastafarians celebrate International Talk Like A Pirate Day on September 19.
<SUP></SUP>
The inclusion of pirates in Pastafarianism was part of Henderson's original letter to the Kansas State Board of Education, in an effort to illustrate that correlation does not imply causation. Henderson presented the argument that "global warming, earthquakes, hurricanes, and other natural disastors are a direct effect of the shrinking numbers of pirates since the 1800s." A chart accompanying the letter (with numbers humorously disordered on the x-axis) shows that as the number of pirates decreased, global temperatures increased. This parodies the suggestion from some religious groups that the high numbers of disasters, famines and wars in the world is due to the lack of respect and worship towards their deity. In 2008, Henderson interpreted the growing pirate activities at the Gulf of Aden as additional support, pointing out that Somalia has "the highest number of Pirates AND the lowest Carbon Emissions of any country."
Click to expand...

I'm feeling the power so strongly today with this thread, guys! I think tonight is the night that I'm going to eat in the name of his noodley appendage.

Guys, I have this fear that Michael wasn't touched by the noodley appendage. What if he never knew how delicious it was? Or only rarely ate it?

This bothers me so much.
L

kindofdisco said:
Guys, I have this fear that Michael wasn't touched by the noodley appendage. What if he never knew how delicious it was? Or only rarely ate it?


I am afraid he is doomed for eternal damnation in Pastafarian hell. No fresh beer and sexy strippers for him. He'll have to spend the rest of his post-mortal existence with Heineken and trannies :mello:

Maybe he was blessed by the noodley appendage. I found this