While some devotees prefer to gather and pay homage at the star's grave site at Forest Lawn, others choose to celebrate the special day outside the singer's childhood home in Gary, Indiana.

Sunday, August 29 marked Michael Jackson's 52nd birthday. And although the King of Pop had passed away on June 25, 2009, his devotees have proven that they haven't forgotten the super star. During the special day, fans gathered and paid tribute at the star's grave site at Forest Lawn in Glendale, California.

On the memorial parks, Michael's fans laid various bucket of flowers, including red roses, sunflowers and daisies, and also best wishes they penned for the late star. One fan paid homage to Michael by putting the "Smooth Criminal" singer's photo in a big yellow board with a message read, "I love you Michael. Sending kisses to you up above."

Many of other Michael's fans also celebrated the birthday outside the singer's childhood home in Gary, Indiana. Gary Mayor Rudy Clay also took part at the celebration, telling crowds "The passing of our favorite son, Michael Jackson, is still fresh in our hearts. A year later, on the day before his birthday, we honor his memory as a great and giving person and as the world's greatest entertainer."

Meanwhile, a day earlier, more than 1,257 people gathered in front of the Riverside County Courthouse to set a record for the most people dancing to Michael's "Thriller", My Desert reported. However, the mass dance still couldn't fight off West Bend, Wisconsin's national record with 1,820 spectators. Mexico City, in the meantime, holds the world record with more than 15,000 dancers in August 2009. he was and has been truly loved

cinderella said:
he was and has been truly loved
Click to expand...

and he is STILL truly loved

Location
in the clouds

It's true, he does have the BEST fans in the world.

right now i absolutely hate living in australia sooooooooooo much. what i would give to b around other fans right now
love u luvly mj

awww wish he was still here

My letter I wrote for him is there! unk: It's by the little fence thingy..with some sunflowers and roses I bought for him....A friend on this forum was kind enough to do that.......I just don't have a close up picture yet... 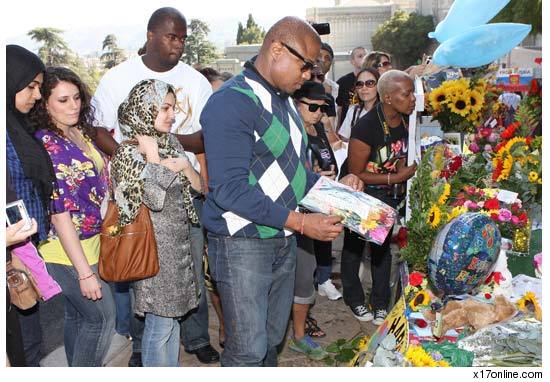 cinderella said:
he was and has been truly loved
Click to expand...

MJ fans are absolutely the best!

AWWW and look at Randy with the fans...

seeing randy brought tears to my eyes. My heart goes out to the fans keeping it real from day one with Michael and always at his grave site faithfully showing him love not for media attention just for the love and respect y'all have for the TKOP real talk

tmp said:
AWWW and look at Randy with the fans...
Click to expand...

Oh, so this is Randy. It is good to see him up and about. I visited Michael's star in LA yesterday and there were candles on it. MJ's fans are loving him and remembering him all over the place.

some things in these articles are repeated so many times, sometimes i think the writer won't get satisfaction without that many repeats. i won't say what those are. i'm just hurt and tired of hearing it, but they don't care. as for him being never forgotten. always wonderful. the fans never forgot him. never forget him.

If I lived in California, I would have def. left flowers. That's beautiful. But I just see so many on facebook and whatnot with their "Happy 52nd Birthday Michael!" status's and it's like a punch in the gut. Am I the only who thinks like this?

^^ you're not the only one. To me 29th of August isn't a celebration either, not anymore. It's a sad, sad day. Happy 52nd makes absolutely no sense. Michael died at 50, and will never grow any older.

Still - the flowers were lovely, and I 100% agree on MJ fans being just the best! We'll never forget him and we'll always celebrate him, if not his birthday.

prettygirlmj said:
I love Michael Jackson with all my heart and soul....but I never understood celebrating a deceased person's birthday. They are no longer here. He didn't get to be 51 or 52...I just never understood that tradition. Every year they celebrate Elvis' birthday, Jimi Hendrix, Kurt Cobain...I just never understood it. I don't find Aug 29th a day of celebration. I find it a day of mourning because it's a reminder that Michael is no longer here with us and celebrating another year of life. That's just me. *shrugs*

If I lived in California, I would have def. left flowers. That's beautiful. But I just see so many on facebook and whatnot with their "Happy 52nd Birthday Michael!" status's and it's like a punch in the gut. Am I the only who thinks like this?
Click to expand...

Well, let me tell you my experience... I met with some fans on his birthday, we listened to his music a bit, talked, wrote some messages, that we left hanging at the place where we met. But there was always this sad feeling behind. I stated clearly that no matter when we meet again, may it even be a joyful event of finally getting to buy his album, may it be his birthday, there will always be a great deal of sadness present. And therefore I never will be able to fully express any kind of happiness regarding Michael again.

But I will commemorate his birthdays. Just not loud and ... happily :no:

0o0jackie0o0 said:
right now i absolutely hate living in australia sooooooooooo much. what i would give to b around other fans right now
love u luvly mj
Click to expand...