Janet's interview on The Heat with Dion airs Wednesday 4/14 at 5:00pm EST on SIRIUS XM Radio.

I missed it, did you catch it?
M

Did she call MJ a drug addict? If I know ahead of time, might spare me the trouble of actually listening to the interview.

Janet was on the Michael Baisden Show today

She thanks fans for supporting her and her family and talks about upcoming projects.

She IS everything!! :wub:

Did anyone catch the interview?

Janet Jackson Tune in to hear Janet's interview on The Breakfast Club tomorrow April 29 at 7:30am on All Hits 95.5!

JANET News — Tune in to hear Janet's interview on The Breakfast Club tomorrow April 29 at 7:30am on All Hits 95.5!

There's been some dancer auditions for Janet, so something is happening...:scratch:

Rockin. said:
There's been some dancer auditions for Janet, so something is happening...:scratch:
Click to expand...

for the essensce fesitval in new orleans on july 2nd

Janet was at donatella versace's party

I was hoping for an album like The Velvet Rope I LOVE that album :wub:
Not that I would be disappointed with a Rhythm Nation type album, that rocked too :heart:.

Thank You in advance

raz2911 said:
I was hoping for an album like The Velvet Rope I LOVE that album :wub:
Not that I would be disappointed with a Rhythm Nation type album, that rocked too :heart:.
Click to expand...

Did you have the opportunity to see the Rhythm Nation Tour..?

Thanks for this! It's been so long since I've been able to enjoy listening to a Michael Baisden show as I used to all the time


nena said:
Janet was on the Michael Baisden Show today

She thanks fans for supporting her and her family and talks about upcoming projects.
Click to expand... The Rock and Roll Hall of Fame has officially announced next year’s inductees: Radiohead, Janet Jackson, Stevie Nicks, Def Leppard, The Cure, Roxy Music and the Zombies will all join the class of 2019.

The induction ceremony will be held at Brooklyn’s Barclays Center on March 29th. An edited version of the event will air later on HBO alongside a SiriusXM radio broadcast. Ticket details will be announced in January.

Artists are eligible for the Rock and Roll Hall of Fame 25 years after the release of their first album or single. Kraftwerk, Todd Rundgren, Rage Against the Machine, Rufus & Chaka Khan, MC5, LL Cool J, John Prine and Devo were all nominated, but failed to make the cut. No newly-eligible acts made it in this year, but this was the first time that Def Leppard and Nicks appeared on the ballot (though Nicks was inducted as a member of Fleetwood Mac in 1998). She will become the only woman to enter the Hall of Fame on two occasions.

“I have a lot to say about this,” Nicks says in a statement, “but I will save those words for later. For now I will just say, I have been in a band since 1968. To be recognized for my solo work makes me take a deep breath and smile. It’s a glorious feeling.”
Jackson also released a statement reacting to the honor. “Thank you Rock and Roll Hall of Fame,” she says. “I am truly honored and I am happy to be in there with my brothers.”

Joe Elliott of Def Leppard is equally thrilled by the news. “Now we can stop holding our breath,” he tells Rolling Stone. “How wonderful to be in the same club as the Rolling Stones and the Beatles and the Who and Queen … It’s a nice badge of honor.”

For Colin Blunstone of the Zombies – who have been eligible since 1989 and have appeared on three previous ballots – this was the result of incredible patience and persistence. “You do start to doubt that it could happen,” he tells Rolling Stone. “I’ve tried to be fairly philosophical about it and tell myself that if we don’t get inducted, it’s just a bit of fun. Don’t take it too seriously. But of course when you’re actually inducted, everything changes. You think, ‘This is a career-defining [and] life-defining moment.'”

His longtime bandmate Rod Argent echoed Blunstone’s sentiment. “I know it’s fashionable in some circles to say, ‘I don’t mind whether I get into the Rock and Roll Hall of Fame or not,'” he tells Rolling Stone. “But that is not how I’ve ever felt. When we were first nominated, that felt like a huge honor in its own right. And this time to turn the corner and get inducted, feels fantastic … I’m just so delighted.”

In a statement, a cordial Radiohead said that “the band thanks the Hall of Fame voting body and extends congratulations to this year’s fellow inductees.” But when we spoke to them in 2017, they were a little skeptical about the institution. “I don’t want to be rude about the Rock and Roll Hall of Fame because for a lot of people it means something, but culturally I don’t understand it,” said guitarist Ed O’Brien. “I think it might be a quintessential American thing. Brits are not very good at slapping ourselves on the back. It seems very show-biz and I’m not very show-biz.”

Roxy Music frontman Bryan Ferry had a different take. “We are delighted to accept this prestigious award on behalf of everyone who has been involved in the world of Roxy Music,” he wrote in a Tweet, “musicians, engineers, producers, designers and numerous people behind the scenes… and of course our loyal fans.”

Many Hall of Fame inductions have wrapped up with an all-star jam where each inductee lets loose on a single song, but finding one that works for all seven inductees might be a challenge. “That’s a bit of a tricky one, isn’t it?” asks Blunstone. “If you were to ask me off the top of my head, I’d go with ‘I Saw Her Standing There’ by the Beatles. Everyone knows that.”

Elliott has a different take. “I suppose older folk would be thinking [Chuck Berry’s] ‘Johnny B. Goode’ and younger folk would be thinking [David Bowie’s] ‘Heroes,'” he says. “It might one of those awkward moments where I’m saying, ‘I’m uncomfortable. I’m not doing it. Do they really want to play with us? Do we want to play with them?’ I don’t know. It depends on the Kumbaya-ness of the evening.”

It's been long overdue, but it finally happened. Congrats to Janet on being inducted into the Rock 'N Roll Hall Of Fame. So well-deserved, now all six Jacksons are in there!
M

With standard tickets already sold out, according to Cleveland.com, 2019's edition of the Rock and Roll Hall of Fame ceremony will be the talk of the town later this year. To present the honorees with tributes and praise, the organization announced those famed artists like Janelle Monae who will honor Janet Jackson with this momentous accolade.

Jackson expressed her gratitude for the achievement when it was confirmed in December 2018. The Rock Hall described the "Made For Now" artist as someone who fearlessly tackled subjects of "poverty, race relations, and drug use" within her music, specifically on the iconic Rhythm Nation 1814. This was Jackson's third nomination.

Other 2019 inductees include Radiohead, Def Leppard, The Cure, Roxy Music, The Zombies, and Stevie Nicks. The event will go down at the Barclays Center in Brooklyn, New York on March 29.
M

Re: Janelle Monae To Present Janet Jackson At Rock And Roll Hall Of Fame 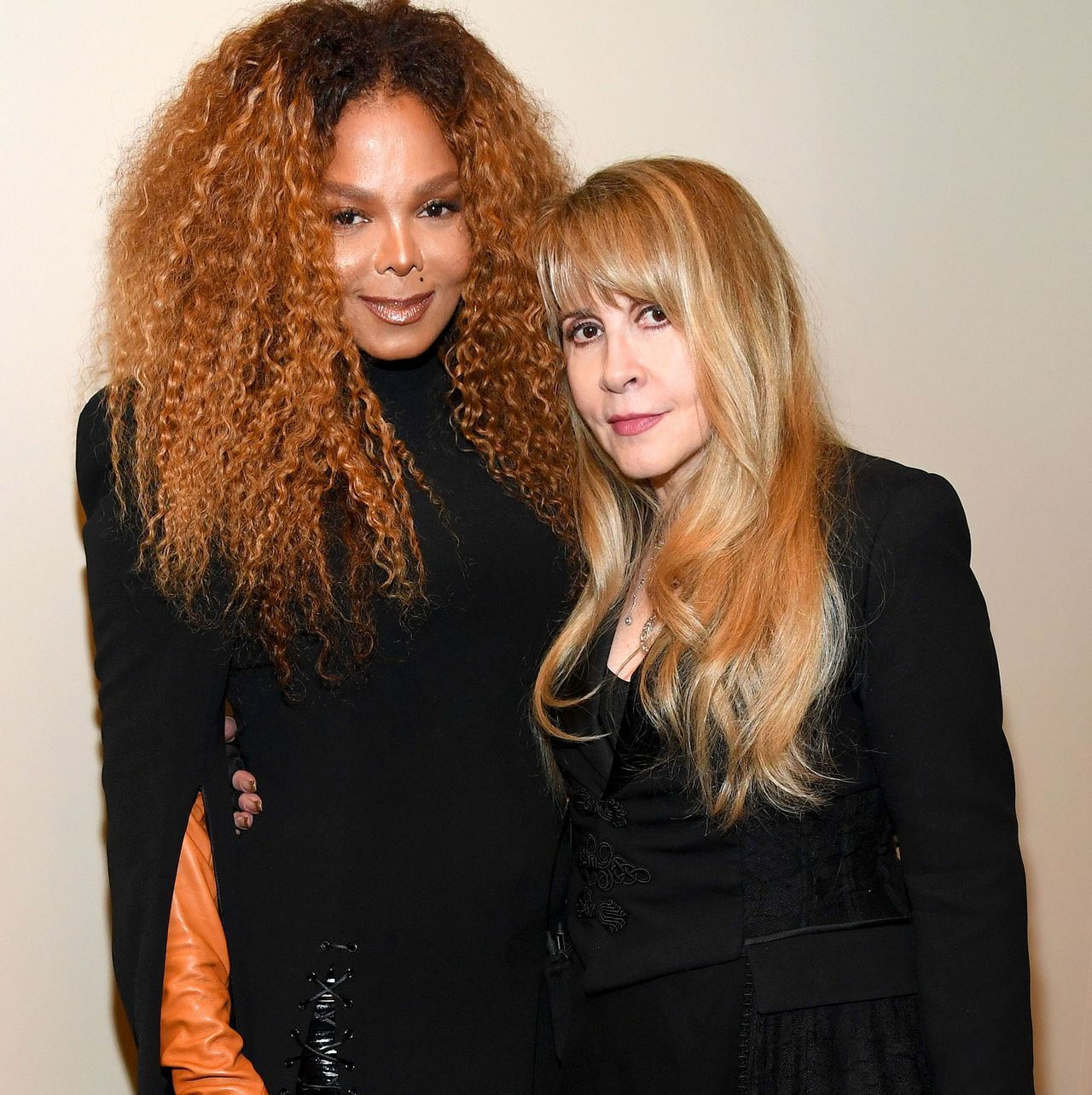 The 34th annual Rock & Roll Hall of Fame induction ceremony was held at New York’s Barclays Center Friday night, ushering the latest class of honorees into the fast-fading boomer rock institution. Long criticized for inducting disproportionately white and largely male musical acts, two of the Rock Hall's biggest-name honorees this year were Stevie Nicks and Janet Jackson. But the Hall of Fame otherwise stuck with its usual brand of guitar rockers, and a quintet of British bands—The Zombies, the Cure, Roxy Music, Def Leppard, and Radiohead—completed the list of 2019 honorees.

Nicks, already a member of the Hall of Fame for her work with Fleetwood Mac, became the first woman to be inducted twice, after gaining entry this year for her solo work. "What I am doing is opening up the door for other women to go, like, 'Hey man, I can do it,'" said Nicks during her speech.

She was introduced by her protégée Harry Styles, who also joined her onstage to perform Tom Petty’s part in "Stop Dragging My Heart Around."

"She is everything you have ever wanted in a lady, in a lover, and in a friend," Styles said of Nicks. "Stephanie Nicks, I love you, we all do, and that is true, Stevie."

Nicks, for her part, couldn’t quite remember what boy band her young pal hailed from. In a moment that perfectly illustrated why the world stans Stevie Nicks so hard in 2019, she briefly claimed that the 25-year-old Styles was a member of NSYNC—a group that’s been defunct since 2002.

"When he decided to make a solo record from NSYNC..." she said of Styles, to titters from the crowd. "Sorry, not NSYNC—I’m never going to live that one down, I know."

With some help from the audience, Nicks soon remembered that Styles was a member of One Direction.

Unlike her fellow inductees, Janet Jackson did not perform. Variety reports that she refused to take the stage because the ceremony was being filmed for future broadcast on HBO, the network behind the documentary Leaving Neverland. Michael Jackson’s estate has sued the broadcaster over the film, which features interviews with two men who accuse the pop star of sexually assaulting them when they were children.

Jackson was introduced by Janelle Monae, who called the singer "the legendary queen of black girl magic." After thanking her family and collaborators, Jackson ended her remarks with a directive to the institution honoring her. "Rock and Roll Hall of Fame please, 2020," she said. "Induct more women."

Jackson wasn't alone in criticizing the Hall of Fame; members of Radiohead have been vocal in their disdain for the institution. Guitarist Ed O'Brien told Esquire.com in 2017 that the Hall is a "little bit thin on black artists and hip-hop artists," and Jonny Greenwood bluntly told Rolling Stone that he didn't care whether or not they were honored. Of the five-piece band, only O'Brien and drummer Philip Selway attended Friday's ceremony.

Trent Reznor tackled his previous criticism of the Hall of Fame head on in his heartfelt introduction to inductees The Cure. "I think it’s only right for me to admit that I’ve been, let’s say, ambivalent about the existence of certain award ceremonies," said Reznor. "In fact, I remember distinctly saying to myself, among other things, how can I even take this awards ceremony seriously if they’ll open their doors to X, Y and Z and not acknowledge the Cure? Not so long ago I get a phone call I wasn’t expecting, and, well, here we are. Let’s just say I’ve never been as happy to eat my words as I was tonight."