Michael in the Media - Thread for Miscellaneous Articles

Since we now have a constant influx of random articles being posted in this forum, I have made this thread to keep them in one designated area.

If an article is mildly interesting, but not actual news or not worthy of much discussion, please post it in this thread. Some examples are: non-mainstream media opinion pieces, general reports on Michael related events, articles quoting people who were close to Michael (which don't offer anything new or especially interesting), statistical information or updates regarding sales, streaming figures, previous projects by The Estate, etc.

If an article is news or important/interesting information worthy of in-depth discussion, it warrants its own thread. Examples include: news about events relating to Michael - announcements/cancellations/removals/records being broken, new projects relating to Michael - music, documentaries, films, theatrical shows, books, games, etc., positive mainstream media opinion pieces/reports on commemoration events, new interviews with members of The Estate or the Jackson family (regarding Michael or The Estate), new interviews with people who were close to Michael which offer previously unreleased information. Make sure to check your article/information doesn't already have a related thread before starting a new one.

Please help to keep this forum free of clutter by using your best judgement when deciding if an article really needs its own thread. Usually they do not.

Include the source with your article. Unsourced content may be removed without notice.

Do not post tabloid junk. It will be deleted. This means articles featuring derogatory rubbish regarding Michael, fake news, or negative gossip. This is a fan forum. Not a place to give free promotion to lies and hatred.

Unless it is regarding Michael, articles about Michael's children or any other member of the Jackson family do not belong in this thread or this part of the forum. Please post in the appropriate thread in the 2300 Jackson St section. Do not post tabloid articles about the children.

Okay. but i have trouble with this stuff. if i put it in the wrong trend please just move or delete because i just don't know. it's very confusing. i will never post lies or bad things about Michael. but sometimes it's hard to tell if it's real or not. i know about Michael but you what i'm saying? :coockoo:
A

NatureCriminal7896 said:
Okay. but i have trouble with this stuff. if i put it in the wrong trend please just move or delete because i just don't know. it's very confusing. i will never post lies or bad things about Michael. but sometimes it's hard to tell if it's real or not. i know about Michael but you what i'm saying? :coockoo:
Click to expand...

Just use your best judgement, that's all I ask. I'm not expecting perfection, this is just to avoid cluttering the forum with all these articles that don't need their own threads. Basically, news or really interesting stuff can have its own thread. Everything else can go in here.
N

I also watched this documentary and brought tears to my eyes when I heard the words, this is not a man that should have died. The parts of the documentary in Michael's bedroom made me feel like I was invading Michael's privacy and wished these parts were left out, does anyone else think the same, or is it just me being to sensitive?
M

I can not understand why everyone can't see the lies that are being said, I watched LN and within the first 10 mins I could tell it was all lies, I didn't watch it for any other reason but to make sure once and for all that it was all made up and I was proven right. I'm not just saying that because I don't want to believe that Michael would do these things, I say it because I know first hand what a sexual abused victim behaves like and it certainly wasn't these two. There must be a reason why people are quick to believe it but I can't see what it is. If this is in the wrong place for this msg then I apologise, I'm new to this site and not sure how it works
N


Tony "Da Wizard" A reflects on the widespread impact of Dr. Dre.
Hip-hop history is important. We've come to love so many of these legendary figures, and value the intricacies of their come-up stories. Earlier today, an interview was brought to my attention by the Murder Master Music Show, in which they linked up with iconic West Coast figure Tony "The Wizard" A, DJ for Hi-C and the west coast establishment The Roadium. Now, the interview originally ran in April, but it felt important enough to share a few months down the line, especially for those of you who value tales of this nature.

Speaking with the Murder Master Music Show, Tony reflects on both his own mixtape run and that of Dr. Dre, who both spent time making tapes at iconic West Coast Flea Market The Roadium. "Dr. Dre was doing them from 84 to 87, and I took over around 87 to 91," explains Tony. "As a matter of fact, in 1990 when I released my last one, one of the songs that was on [DJ Quik's homemade mixtape The Red Tape], the infamous song that dissed MC Eiht, that song was on my tape from The Rodeo."

As it happens, many of Da Wizard's early tapes featured appearances from a pre-fame Eazy E and Dr. Dre. "Even though they weren't to the magnitude they are now, those guys were real professionals," reflects Tony. "Me being from the streets, and hearing some street shit, I knew this was something the world had never heard of. I didn't know it would blow up all over the world, but I knew it would blow in my neighborhood...I remember asking Dre if he knew it would take off the way it did. He said 'no, but I knew controversy sells, so we went controversial with it."

Tony A speaking on Dr. Dre with The Murder Master Music Show
"Dre was a very very smart dude, even then when he was just doing mixtapes," says Tony. "He knew the business already. Ten steps ahead of everyone. Every time I went to Sir Jinx's house, I never saw Dr. Dre sitting around eating a bag of chips watching TV. He was always on the phone, always on the drum machine, he was always making moves. Eazy E was the same way. He was always showing people his music, his demos."

"Dre loved east coast music," continues Da Wizard. "A lot of their beats were sampled from east coast artists. I'll take it further, east coast artists love Dre's production. I was in the studio when EPMD went there, and Chuck D went there. They wanted Dre to produce some of their songs. The east coast was definitely influenced by Dre. Madonna, Michael Jackson, wanted Dre to produce tracks for them. Let me tell you why he didn't. Not only because he was signed exclusive to Eazy, but he had so many projects, he couldn't. He didn't have the time. It was only one goose to lay the golden eggs."

Imagine a world where Dr. Dre had linked up with Madonna and MJ? What might have changed?
M

Alh21 said:
I also watched this documentary and brought tears to my eyes when I heard the words, this is not a man that should have died. The parts of the documentary in Michael's bedroom made me feel like I was invading Michael's privacy and wished these parts were left out, does anyone else think the same, or is it just me being to sensitive?
Click to expand...

I agree. Michael shouldn't die at all. he had so much left to do on this earth. gone too soon.
S

(CNN)The black loafers that Michael Jackson used to perform his signature moonwalk for the first time on stage are going up for auction.

The star owned the Florsheim Imperial leather shoes and wore them while rehearsing his performance of "Billie Jean" for the "Motown 25" TV special in 1983.
That rehearsal marked the first time the King of Pop performed his famous backward-sliding dance move on stage, according to GWS Auctions.
The famous loafers will be put up for auction May 26.
"Anything related to Michael Jackson is extraordinary, and to have something so incredibly historical as these shoes worn by Michael when he first did that now famous moonwalk is beyond special," Brigitte Kruse, owner of GWS Auctions, said via email. "We are so very honored to be able to offer them at auction."
She said the auction house has a "very conservative estimate" on the shoes of $10,000.
"These shoes are in wonderful condition for their age, with evident signs of use to the soles," the catalog description reads.
The shoes have been owned by choreographer and dancer Lester Wilson, who said Jackson gave him the shoes in his dressing room after rehearsing with his brothers for the special, the auction house said.
It's possible the shoes were used during the performance on the special, too, because according to the letter of authenticity, Jackson referred to the pair as his "magic shoes" and a pair of performance shoes has never surfaced, GWS Auctions said.
"Billie Jean" and the album on which it appeared, 1982's "Thriller," made Jackson the first artist to have a No. 1 pop single, pop album, R&B single and R&B album chart simultaneously.
Jackson began performing at age 5 with four of his five brothers as The Jackson Five. His first solo album, "Off the Wall" in 1979, sold more than 20 million copies and had four Top 10 singles.
The music superstar died in 2009 at age 50 after suffering cardiac arrest at his home near Los Angeles.
M

Me and Michael share a lot of the same characteristics. i been going to therapy almost 10 years now. (isn't that weird?) if my therapist tells me that i'm okay and that my interests are unique then article about Michael from therapists from 1984 saying the samething shows a lot. MICHAEL IS INNOCENT AND ALWAYS BEEN HAVE. 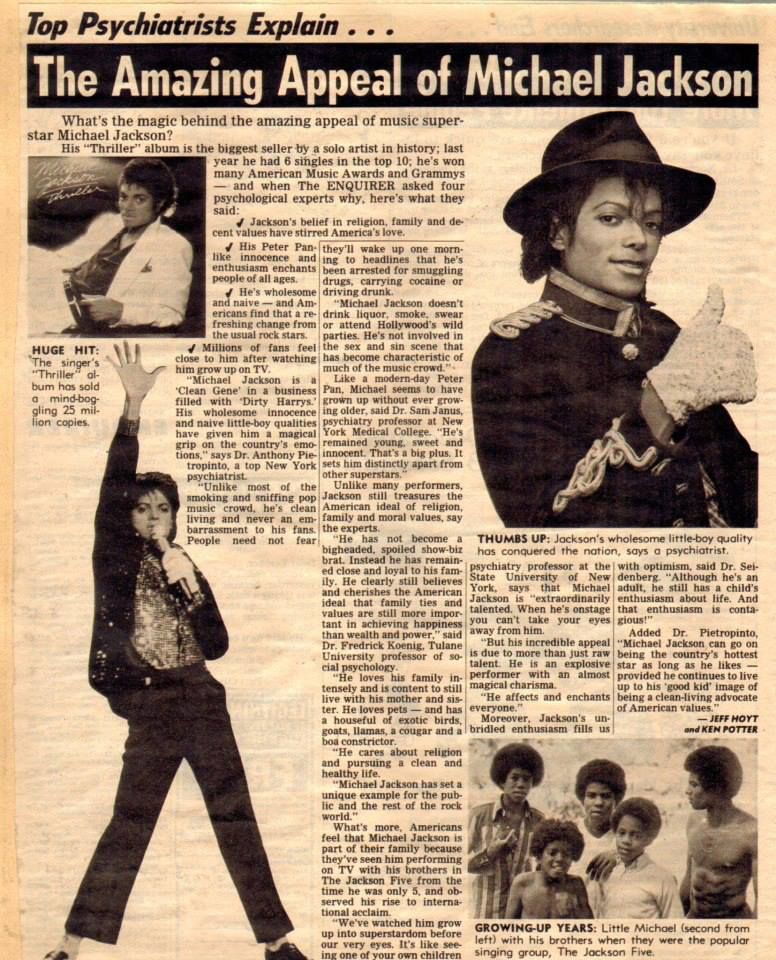