Michael Jackson dressing gown up for auction in Dorset 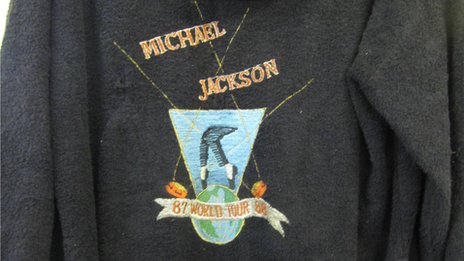 The late pop star handed it to a female fan in the wings after coming off stage at Aintree during his Bad tour.
The woman said Jackson gave her the black towelling robe as a gift after discovering it was her birthday the following day.

The lot, expected to fetch up to £4,000, will be auctioned at Cottees in Wareham, Dorset, on 21 February.

The woman, who wishes to remain anonymous, said her husband had acted as chauffeur to Jackson during his stay in Liverpool and so she was able to obtain a backstage pass for the concert.

Her crew badge is included in the lot for sale.

She had been watching the concert from the wings when Jackson came off stage, wearing the gown that had been put on him by one of his dancers.

She said she had asked for a photograph but he replied "he would give her something better" than a photo.
"With that he took off the black dressing robe and gave it to me", she said.

According to the auctioneers the hooded robe is one of only a few made specially for the dancers on the Bad tour.

It is embroidered with "Michael Jackson - 87 World Tour 88".
It has a pair of dancing legs above a globe and to the front has the name of the dancer Dominic Lucero woven into the top right.

"The robe has never been washed since that night and has been carefully stored since then," the vendor said.


She added she was selling the robe after 23 years so that "someone else can enjoy it".

i would NEVER sell it. EVER

I would never sell that robe, I would keep it and treasure it forever, even wear it, aww.

What irks me is that when Michael gave people like this his things he did it out of love...and they go sell it....it really makes me so angry. If I had something that Michael gave me...you had better believe that I would take it to MY grave with me..NOWAY anyone would EVER get it away from me.

I would bury it with me and NEVER EVER EVER sell it!!!

Nice story, but I think she needs the money. I wish I could buy it to roll around in.

You don't know her situation, so let her be. 23 yrs is a lifetime, and maybe she isn't in love with MJ like most of you.

xthunderx2 said:
What irks me is that when Michael gave people like this his things he did it out of love...and they go sell it....it really makes me so angry. If I had something that Michael gave me...you had better believe that I would take it to MY grave with me..NOWAY anyone would EVER get it away from me.
Click to expand...


Very true. I would treasure it also especially if he gave it to me. Im not in her shoes she might need the money but idk I think I wouldnt even sell it even if I needed the money like xthunderx said I would take it to my grave with me.

max000 said:
You don't know her situation, so let her be. 23 yrs is a lifetime, and maybe she isn't in love with MJ like most of you.
Click to expand...

I agree. Even tho a gift its not supposed to be given as a present to someone else, even less sell it (disrespect), maybe she needs the money and she isnt as devoted to him as we are..

I guess none of us know this person's situation. Maybe she needs the money or maybe she just has no personal attachment to it. I'd have treasured it forever. Hope it goes to a fan.

I'd love to have that, or any piece of his clothing

I could never sell something like that. Not even if I really needed money.

I don't think precious gifts are meant to be taken to ones grave. (I would hate to think MJ treasures are being buried in graves LOL ) but seriously I think treasures are meant to be passed on kind like a Heir loom so they can continue to be enjoyed by others who appreciate it. I hope it eventually ends up in a museum for all the world to marvel at it and the man who wore it :wub:


Lets try and put things into perspective - The robe wasn't even Michael's. It was put on him by one of his dancers a gift to him maybe to help keep him warm. Now what did Michael do with this gift given to him out of love ? He he shared his gift with someone else Passing on the love - Why because there are NO conditions put on gifts. Once you give something to someone Its is "theirs" to do with what they see fit even sell it if need be. I don't find it disrespectful to pass it on or even sell it. IMO its much more admirable then if we selfishly bury MJ treasures in our graves so no one else can ever enjoy it. Just my opinion and food for thought.
You must log in or register to reply here.
Share:
Facebook Twitter Reddit Pinterest Tumblr WhatsApp Email Share Link
Top