Happy birthday Mike! Miss you and your music so much.
J

<blockquote class="twitter-tweet" data-lang="de"><p lang="en" dir="ltr">Today would’ve been Michael Jackson’s 60th birthday. I’ve been thinking about what I want to say in this tweet, but I am unable to describe what this man has meant to me throughout my life. I wouldn’t be me without Michael. Thanks for always being there. &#10084;&#65039; <a href="https://twitter.com/hashtag/MichaelJacksonDay?src=hash&amp;ref_src=twsrc%5Etfw">#MichaelJacksonDay</a> <a href="https://t.co/yAq2fsrtlV">pic.twitter.com/yAq2fsrtlV</a></p>&mdash; Liam McEwan (@LiamMcEwan) <a href="https://twitter.com/LiamMcEwan/status/1034858043358367745?ref_src=twsrc%5Etfw">29. August 2018</a></blockquote>
<script async src="https://platform.twitter.com/widgets.js" charset="utf-8"></script>

They do not leave They are not gone The walk among the flowers now #NateGiorgioFineArt for the fans #InOurHeartsForever #MJFam #MichaelJackson60thBirthday &#10084; 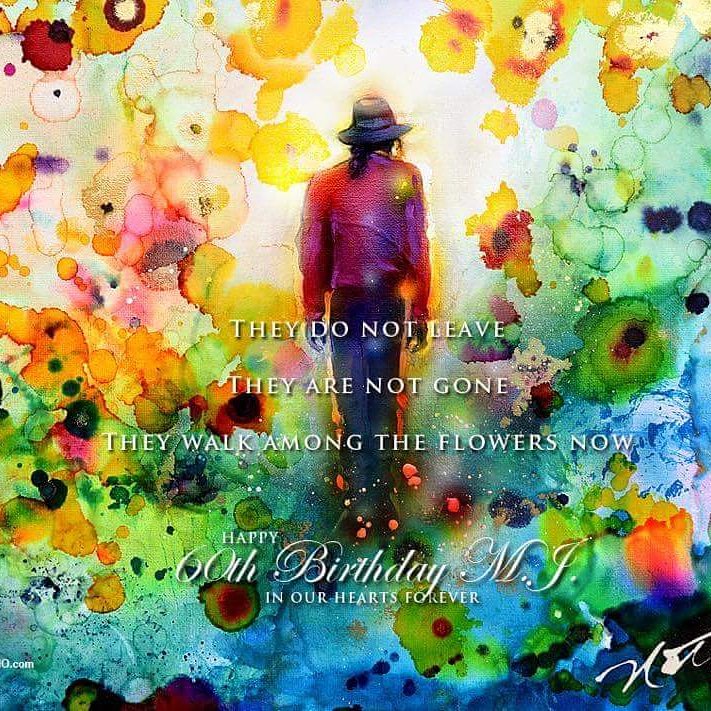 <blockquote class="twitter-tweet" data-lang="de"><p lang="en" dir="ltr">You inspired me. You taught me. You changed me. You kept me going in my darkest hour and I will always be grateful for you. You were magical yet so humble. You taught me the power of dreaming. You showed me what a real man is. I love you so much and miss you every single day. <a href="https://t.co/LkjXk4fdgG">pic.twitter.com/LkjXk4fdgG</a></p>&mdash; TJ Jackson (@tjjackson) <a href="https://twitter.com/tjjackson/status/1034784605763715072?ref_src=twsrc%5Etfw">29. August 2018</a></blockquote>
<script async src="https://platform.twitter.com/widgets.js" charset="utf-8"></script>

Happy birthday precious angel. You are always in my thoughts and will be forever in my :heart: I love you and miss you very much :wub:
W

<blockquote class="twitter-tweet" data-lang="de"><p lang="en" dir="ltr">I’ve been trying to write something meaningful, special and fitting, but it seems everything I come up with just isn’t good enough. There are no words to describe your talent, focus,… <a href="https://t.co/yqM5tRDHAo">https://t.co/yqM5tRDHAo</a></p>&mdash; TARYLL Jackson (@tarylljackson) <a href="https://twitter.com/tarylljackson/status/1034843436661334018?ref_src=twsrc%5Etfw">29. August 2018</a></blockquote>
<script async src="https://platform.twitter.com/widgets.js" charset="utf-8"></script>

LAS VEGAS, Aug. 29, 2018 /PRNewswire/ -- The entire world is coming together today for the Diamond Celebration for Michael Jackson's birthday. From a giant Diamond Celebration crown at Southbank &#8211; Observation Point in London, to a mural in Hamburg, Germany, to fan generated gatherings in Japan, Spain, Moscow and more, to a party for over 1300 fans in Las Vegas, events are planned to salute the King of Pop, the greatest entertainer of all time and the biggest selling solo artist in history. In order to recognize the importance of the day, Sony Music and the Estate of Michael Jackson are releasing Michael Jackson x Mark Ronson: Diamonds are Invincible, Grammy award winning producer/artist/DJ Mark Ronson's take on some of Michael Jackson's biggest hits.

Ronson said, "It was such an amazing, awe-inspiring and insanely intimidating task to put this together, although you'd need hours and hours to fit all of Michael's classic tunes into one track. I wanted this to feel like being on the dancefloor at a sweaty, wild NYC club getting down to as much MJ as possible in five minutes. And I can't wait for you to all hear the extended version coming soon."

Tonight in Las Vegas, after a performance of the acclaimed Michael Jackson ONE show by Cirque du Soleil (Broll HERE), hundreds of fans, Paris Jackson, Prince Jackson, Michael's children, plus his brothers Jackie, Tito, and other celebs such as Gabrielle Union, Vanessa Hudgens, Ashlee Simpsons Ross and Evan Ross and sports figures such as Blake Griffin will be on hand for the Diamond Birthday Celebration at the Daylight Beach Club at Mandalay Bay, hosted by Sony Music and the Estate of Michael Jackson. Prince and Paris will be a part of a special presentation to their father from The Elizabeth Taylor AIDS Foundation for which Paris is an Ambassador. A DJ set from Mark Ronson and a surprise performance by an 8x Grammy winning star will entertain the crowd.

Earlier in the day, luxury shoe designer Giuseppe Zanotti announced "Giuseppe Tribute to Michael Jackson", a limited-edition sneaker collection with each pair numbered in sequence, available in mid-October in select Giuseppe Zanotti stores worldwide and giuseppezanotti.com, and exclusively at Neiman Marcus and Neimanmarcus.com in the US. Created in partnership with the Estate of Michael Jackson, each exclusive sneaker will be numbered in sequence and will feature Swarovski crystals on the fasteners and Michael's name engraved on the buckle.

Other salutes to Michael's birthday are BOSS's release today of a capsule collection that includes a new edition of the iconic suit that he wore on the cover of Thriller and three unisex T-shirts, each featuring an iconic moment in Michael Jackson's career. And sonic experts Master & Dynamic's have created a special limited edition wireless headphones available worldwide.

The cultural relevancy of Michael Jackson's music and legacy has never been more evident:

A hit Vegas show, a Broadway play in the works, a huge Drake track on which Michael is the featured vocalist, a limited edition sneaker from one of the world's top luxury designer and a critically acclaimed Michael Jackson-inspired exhibit at the National Portrait Gallery in London. The popularity of the iconic artist and his music show no signs of slowing down. The Recording Industry Association of America (RIAA) announced last week that 21 different songs and three albums, spanning Jackson's career, have garnered major new Gold and Platinum certifications. With 67M Facebook followers & 8.5M YouTube subscribers & 5.3B video views, Michael Jackson is as hot as ever.

Happy Birthday, Michael! Thank you for a magical childhood and for teaching me to stand up against injustice, ignorance and bigotry.

Happy birthday, babe. For 30 years you have been and will always be the love of my life. Miss you and love you every day. 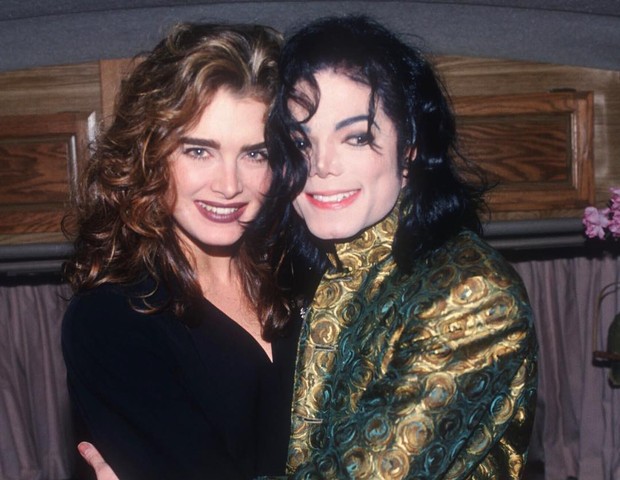 brookeshields
https://www.instagram.com/p/BnEWiObBAbC/?hl=en&taken-by=brookeshields
Missing my dear friend #MichaelJackson on his birthday ??

One of the biggest tributes came from Janet, who worked closely with Michael and even recorded the hit song &#8220;Scream&#8221; with him in 1995. According to Billboard, Janet released a sneak peek of her new &#8220;Remember the Time&#8221; inspired video on her late brother&#8217;s birthday.

The pop singer joined social media stars Kwaylon &#8220;BlameItOnKway&#8221; Rogers and Andrew &#8220;King Bach&#8221; Bachelor to create the homage to her brother&#8217;s legendary video. The clip stars Janet playing a queen who passes judgment on her prisoner dancers. The video is inspired by Michael Jackson&#8217;s iconic 1992 &#8220;Remember the Time&#8221; video that starred supermodel Iman and Eddie Murphy as a king and queen in ancient Egypt.

TMZ reported that Janet and Kway met at the Billboard Awards earlier this year and the social media star Kway pitched the idea and suggested releasing it on Michael&#8217;s 60th birthday. You can see the amazing video tribute below.
M


A hit Vegas show, a Broadway play in the works, a huge Drake track on which Michael is the featured vocalist, a limited edition sneaker from one of the world's top luxury designer and a critically acclaimed Michael Jackson-inspired exhibit at the National Portrait Gallery in London. The popularity of the iconic artist and his music show no signs of slowing down. The Recording Industry Association of America (RIAA) announced last week that 21 different songs and three albums, spanning Jackson's career, have garnered major new Gold and Platinum certifications. With 67M Facebook followers & 8.5M YouTube subscribers & 5.3B video views, Michael Jackson is as hot as ever.

SOURCE The Estate of Michael Jackson
Click to expand...

Channel 2's news anchors took part in paying tribute to Michael Jackson this morning on what would have been his 60th birthday.

During Channel 2 Action News This Morning, anchors Fred Blankenship and Linda Stouffer playfully inserted "The King of Pop's" famous songs into the newscast.

Triple Team Traffic's Mark Arum was also in on the fun, listing out songs from Thriller, Bad, Dangerous and Off the Wall albums.

Here's my tribute to Michael and his 60th birthday!
Wish him all the best! May he rest in peace! I know your up there smiling in heaven

Thank you for all you've given us. You are greatly missed but forever remembered. What you've left behind is amazing, your legacy is undeniable and everlasting and something to be proud of. Something they can never ever take away and it will only get stronger.