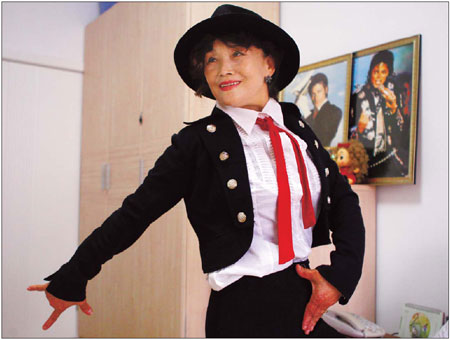 Encouraged by Michael Jackson's dancing, granny Bai Shuying started a new life and became one of the best Jackson imitators in the country. Photos by Zou Hong / China Daily

For thousands of popular music fans around the world, the summer of 2009 turn dull and gray when the superstar Michael Jackson fell out of the sky. The legendary singer's death affected a 65-year-old Chinese woman so much she was inspired to get up on stage to remind people of the King of Pop's talent.

The grandmother is Bai Shuying, a Jackson fan from Xiangfan, a city in Central China's Hubei province, who has been addicted to the star's dance routines for more than 10 years and regards him as her permanent idol. When Beat It, a famous Jackson song, blasted out on the set of China's Got Talent, the country's equivalent to Britain's X-Factor and American Idol, Bai danced with confidence and a huge smile. A few years ago she would not have believed she could do that.

"Michael's performances give me strength, tide me over my difficulties and take me back to the happiness I felt before my life turned bad," Bai told METRO.

At the beginning of 1990s, Bai divorced and developed tuberculosis in her kidneys, a life-threatening disease. She soon withdrew from society.

In 1991, on advice from her relatives, Bai came to Beijing to get better treatment and find a better place to live.

"I couldn't walk and often spat blood at that time and I thought I had a short time left," she said. "In my early years in the city, I was always complaining about my life and carrying a grudge against my ex-husband."

One day in 1997 Bai wandered into a shop and saw a man singing and dancing on a video screen.

"The man's fabulous dancing fascinated me and I stood in front of the screen for a long time," Bai said. "I didn't know who the man was and asked a saleswoman. She told me it was Michael Jackson."

Bai immediately paid 42.5 yuan, nearly a sixth of her monthly salary at the time, for a video of a Jackson concert and started to learn his dance steps.

However, she did not have a video player at home and her daughter did not encourage her dancing. 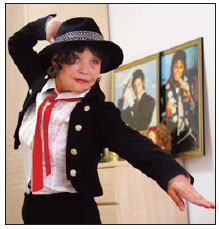 The granny did not give up her fondness for Jackson despite the many disapproving comments. She decided to do just what she wanted.

"I had to secretly watch the disk at a colleague's home and was crazy about following Michael's performances," she said. "Sometimes I even got hurt as I imitated the star's difficult and dangerous dance steps. But I never told my daughter and hoped she would support me one day."

Gradually, the dancing helped to improve Bai's physical condition and she began to become involved in society again.

She danced on the square at the Workers' Gymnasium and most senior citizens who saw her there became interested in her special exercises.

"Nearly half of the people who did morning exercises stood behind me to follow my dance steps, which gave me great confidence and made me proud," the elderly woman said with a smile, adding it had been a long time since someone had approved of her behavior.

With that encouragement, she put Jackson's best-known steps into ordinary exercise routines and created her own dances.

During the creative process, she forgot her past sorrows and was not afraid of other people misunderstanding her.

Meanwhile, her daughter also changed her mind, because she realized her mother was enjoying a new life and had a great passion for learning Jackson's dances.

Out of love for the superstar, Bai collected every piece of news about Jackson and swapped cooking magazines with a colleague in exchange for a book that showed his most famous dance move: the moonwalk.

"I took that book as my teacher and cherished it," Bai said. "Many fans of Michael's borrowed the book from me, but I preferred to write out the dance steps for them rather than give them the book."

After she heard the news of Jackson's death, Bai was too depressed to accept it.

However, she soon started doing exercises in front of a mirror in the hope that she could perform her idol's dances in memory of him.

Meanwhile, many young Jackson fans noticed the granny, swapped dance steps with her and helped her make steady progress.

Earlier this year, Bai stood on the stage of Shanghai Dragon TV to show off her talent for imitating Jackson's dancing.

"I was so nervous before my performance my weak legs could barely move," she said. "But as I thought of my friends' encouragement and support, I quickly concentrated on doing the dance."

Location
Under The Moonlight

Wow, older and better than I'am.

Awww I remember her... She's very strong! This is What Michael does through his music...