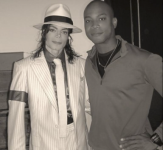 Travis Payne is a choreographer, director, and producer. He was the choreographer for Michael Jackson's This Is It. Travis also served as the associate producer for This Is It, and along with the director, Kenny Ortega, was extensively and intimately involved in the making of the film.

Travis Payne is the youngest inductee into the Gallery of Greats, and the recipient of numerous nominations and awards. He has been honoured with the MTV Video Music Award for Best Choreography four times for his work with En Vogue, Salt-N-Pepa as well as Michael Jackson and Janet Jackson on the music video /short film on "Scream" which is listed in the Guinness Book of World Records as the most expensive music video ever made. He also received three American Choreography Awards, including honours for his work on "Scream" and Michael Jackson's Ghosts. Payne was nominated for an Emmy Award for his choreography work with Michael Jackson on the "Dangerous" performance for the 1995 MTV Video Music Awards opening segment. He was again nominated for an Emmy Award in 2006 for his work on Disney's The Suite Life of Zack & Cody. He is also a two-time recipient of the prestigious Music Video Producers Association Award for Outstanding Achievement in Choreography for his work with the Brian Setzer Orchestra and Ally McBeal. In December 2009, Payne was featured with a write-up in the Michael Jackson Opus and recognized for his choreography and contribution for his work with the King of Pop. He also appeared in a 1993 episode of the TV series Martin.

On January 26, 2011, Travis Payne was honoured with a Lifetime Achievement Award at the 12th-anniversary show of The Carnival: Choreographer's Ball.

So what are you waiting for, please submit your questions? We will be collecting questions and closing question submission on at the end of November.

How you were selected for Dangerous Tour and how were the rehearsals?

Which Michael Jackson tour is your favorite and why?
Last edited: Oct 11, 2021
M

You created new/extra choreographies for "this is it" that did not see in the film?

Do you know if there is a song that you knew that Michael would have wanted to perform in a presentation or tour?
Especially when he was live at Apollo 2002 the song list was shortened.

Could you tell a funny story with Michael that you have not said before? In some rehearsals or in some tour?

Some questions about This Is It:

Were there any plans to perform new music during the This Is It residency?

Did Michael mention any new songs that he was working on and that he was excited to perform live?

Were there plans to bring a fan onstage during You Are Not Alone?

How long did Michael plan to tour after the 50 shows in London?

Was Michael going to do the lean during Smooth Criminal?

Why was the J5 medley included in This is it?
Did you presented a new choreo for an old song for This is it and got scrapped in favour of the old choreo?
Whose idea was to incorporate threatened into thriller? Was the outtake of the thriller rap going to be used for thiller on the actual show?
Whose idea was to incorporate the snippet of another part of me in jam?
Were there talks of incorporating previously unperformed songs on this it?
Can you clarify is there was a ever an actual live performance of Remember the time at the Dangerous Tour?

How was the creative process when planning for This Is It? Was it different when compared to previous tours?

Were there any songs that you really wanted to be included in the setlist and suggested them to Michael?

Performances of the song Dangerous evolved a lot over the years. Which version is your favorite? Also how different it was going to be in This Is It?

When you met Michael for the first time?

In your opinion, what was Michael's greatest live performance?

What would you say was Michael's favourite song to perform live?

Thank you for doing this interview
Last edited: Nov 1, 2021

Did you and Michael ever talk about choreografic ideas for the uptempo songs off Invincible like 2000Watts, Heartbreaker, Unbreakable, Invincible? And did you talked about ideas for “short films”?

Was the Little Dance sequence Michael did for Threatened that we all saw for This is It, rehearsed or was it a just some movements by Michael at the moment?

Thank you for standing as a friend besides Michael

A song Michael planned to perform that he never did

A song you wished he performed but never did

Who was the dancer wearing the wolf mask and pretending to be Michael during the magic trick in Thriller on Dangerous and HIStory tours?