StaceyMJ said:
Thanks ivy. And what about the trial and charges? Any chance that will be made today as well?
Click to expand...

It's almost certain that this will go to trial.

i would think theres gonna be clsoing statements first. aint gonna get a ruling on the charges today imo. theres only an hour left of court. heck knows how long he will take. no idea how it works in a prelim.but considering the obvious evidence maybe he will come out straight away. but i prefer a day or 2 and up/add on more charges. thats the important issue

and thanks for all the ppl updating us and explaining certain things. much appreciated!!!!!!!!!!!
Click to expand...


:better: hugs to you and everyone else who is nervous. I'm feeling nauseated and my heart is racing. I'm holding all of your hands right now.

Chernoff:
Defense exhibits, missing C for some reason. Dan Myers may have walked out with it. Going to try to locate it.
Click to expand...

Let's hope it's not Conrad who went missing AGAIN. :bugeyed

Thanks to everyone, especially ivy, for all the updates since last week, it's much appreciated.

That's what I thought as well lol

Yes, ivy you have been wonderful. Thankyou so much.
B

This jerk spoke very ill of Michael today in some interview he did. It was on MJJustice Ustream today :angry:

Is anyone else's TMZ live stream stuck or is it just mine?
I

thx ivy for your great work every day and posting it..

hope it will come today.. though..

no need for thank you's guys. We are all here for Michael.
E

add him to the defence witness list. some ppl arent very bright are they!

Ustream said their hearing Murray license was suspended!? Their trying to get confirmation cause they got it from twitter!
I

hope those evidence is not important

Murray's license suspended. According to UStream. Don't know where they got that from.

PrincessMichaela said:
Is anyone else's TMZ live stream stuck or is it just mine?
Click to expand...

prettygirlmj said:
This jerk spoke very ill of Michael today in some interview he did. It was on MJJustice Ustream today :angry:
Click to expand...

did he cry out of happiness for being in TII?
Chucky... I thought of the doll.... you know which one horrible doll...

sorry, off topic I went

MJJC on twitter:
unconfirmed report - Murrays Licence has been suspended

Milka said:
Murray's license suspended. According to UStream. Don't know where they got that from.
Click to expand...

NO we don't need any "unconfirmed reports" we need ABSOLUTE CONFIRMATION NOW. People don't need to get all happy just to be let down.
B

babykinsilk05 said:
NO we don't need any "uncomfirmed reports" we need ABSOLUTE CONFIRMATION now. People don't need to get all happy just to be let down.
Click to expand...

from Ustream, they saw it in twitter, but they don't have a confirmation yet.

bouee said:
from Ustream, they saw it in twitter, but they don't have a confirmation yet.
Click to expand...

agg, but in Twitter is not confirmed either.. :doh:

Ustream Has Not reported that murrays license has been suspened they're waiting for a confirmnation.

Dr. Conrad Murray Ordered to Stand to Trial
about a minute ago by TMZ Staff

Dr. Conrad Murray was just ordered to stand trial in the the death of Michael Jackson. 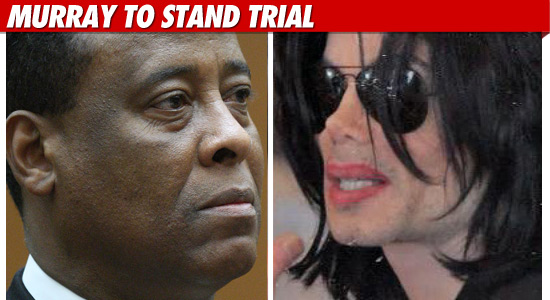 Judge Michael Pastor ruled there is sufficient evidence to warrant a manslaughter trial.

Judge Pastor's ruling follows a 6-day preliminary hearing in which more than 20 witnesses were called.

If convicted Murray faces a maximum of 4 years in prison.
M

oooh I wish theyd hurry up I need to go to bed was about to go when I read that the case was rested. Even though Im tired I wont be able to go to sleep until I know whats happening
You must log in or register to reply here.
Share:
Facebook Twitter Reddit Pinterest Tumblr WhatsApp Email Share Link
Top