Lil said:
omgomgOMG...:dropdead: thank you so much for this! :shifty:

Thank you for the answer

Dazedmadonna said:
So cute, love it!
Click to expand...


speechlesslove4michael said:
I REALLY want to know who this mariagrig person is. She has some amazing pictures. Is she on a tumblr or what?
Click to expand...

She really does. I love browsing her colletion. And I wanna thank her very much. :thankyou:

Thanks to you guys as well!! Fun times with Mike Tyson and Rodney Jerkins at Neverland during the Michael's 45th Birthday Party at Neverland hosted by KIIS.FM!

AWARDS ~ Michael receives a beautiful Achievement award from Sony Music Entertainment. The award featuring a Japanese Samurai hat and plaque read ~ "In recognition of Michael Jackson's outstanding achievement over the years as an artist and a performer.. 1979 Off The Wall, 1982 Thriller, 1984 Bad, 1991 Dangerous and the legend continues..."
Click to expand... 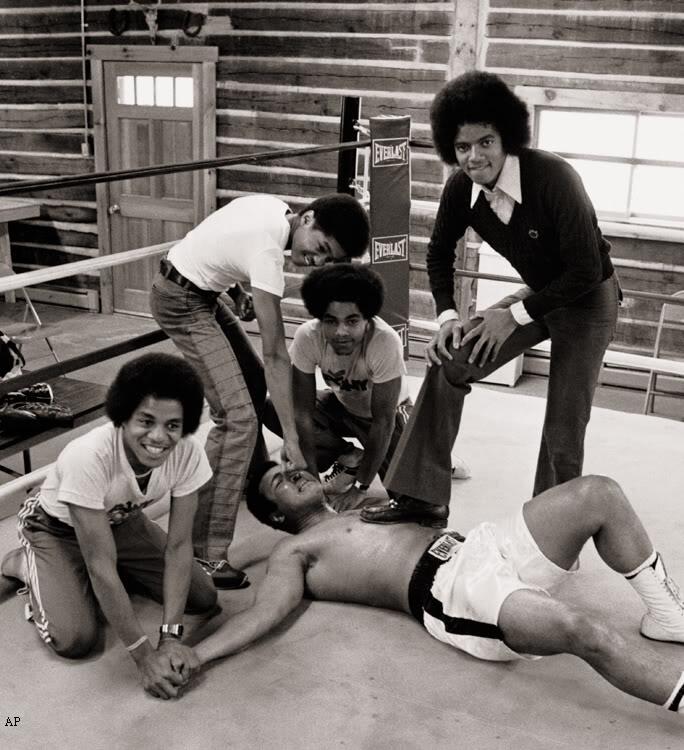 OMG I have ALWAYS loved the pictures of Michael from that appearance where he is wearing the black suit and red shirt and now there's another one :wub:

These new leaking Invincible era pictures are killing me *_*

Michael in that last phone *DEAD*

I wonder what that event was for I wonder what that event was for
Click to expand...

Christening of Miko Brando's (son of Marlon Brando and MJ's former bodyguard) kid. Around 1995 I guess.

What performance is that screen capture from? And thanks for the answer ^ about the christening

Is this even real? :mat:

Is not real, no es Michael.

Jeez, I was 95 percent sure, the missing 5 had to do w/the fact that you can't see his hands... or anything recognizable for that matter :lol: thanks for confirming it Virre 1978 and Michael is the guest host at Hal Davis's Talented Teen International created for young women 13 to 17 years of age with performing talents, by legendary radio and television personality Hal Jackson, which was held at Coconut Grove in Los Angeles. After performing during the evening and as the guest host Michael crowned the winner 16 yrs old gymnast Miss Connecticut, Sheryl Piland ~ who recalls the occasion meeting Michael during this interview with Soultrain and Michael gives 'all' the girls some good advice, and later catches Michael having water fights! ~~

Soultrain.com: What talent did you execute during the international pageant?

Sheryl: I did a gymnastic dance routine to a song from The Wiz.

Soultrain.com: That year&#8217;s international pageant had the honor of having Michael Jackson as guest host.

Sheryl: I was so excited! I used to cut out pictures of Michael from Right On! magazine. I used to dream I was going to meet him and I did and it happened in a big way.

Sheryl: What are your memories about him during the pageant?

Sheryl: Michael, Randy and Janet Jackson were a part of the rehearsals at the Coconut Grove in Los Angeles, where the pageant was held. They were so much fun. Michael was really cool and quiet. I remember he and Randy had their hair in braids underneath their safari hats (laughs). During the rehearsals Michael told all the girls to practice as if we were actually giving the real performance and to give it our all. He was the ultimate professional.

Soultrain.com: Meeting Hal Jackson must have also been a great honor for you.

Sheryl: Hal Jackson is a legend. I didn&#8217;t realize how many people he helped and how many lives he touched. He was such a gentleman. His wife Alice was a class act, too. She taught me a lot. She was a classy lady. I emulated her.

Soultrain.com: What else do you remember about the pageant?

Sheryl: Ja&#8217;net DuBois from Good Times was a judge, and so were Fred &#8220;Rerun&#8221; Berry and Haywood Nelson from What&#8217;s Happening. Jermaine Jackson was also there and before the pageant started, he came backstage and kissed me and told me he was pulling for me. It was also so much fun meeting all of the girls. Hal Jackson gave us a chance to meet people from all over the world.

Soultrain.com: So, what do you remember about that moment your name was called as the winner?

Sheryl: I could not believe it! I was so nervous! Michael sang a song called &#8220;Jump For Joy&#8221; as he grabbed my hand and walked me across the stage. He was happier than me!

Soultrain.com: Beautiful! What happened after the pageant?

Sheryl: A reception was held afterwards. I met the Jackson family. They sat at my table.

Soultrain.com: Did you cross paths with the Jacksons again?

Sheryl: Yes, when the Jacksons did the Victory Tour. When they came to New York City, I got to go up to Michael&#8217;s suite in Helmsley Palace and I saw him and Emmanuel Lewis having water pistol fights! (Laughs). He was a big kid. Working with and spending time with Michael Jackson was one of the best experiences I&#8217;ve ever had.

Along with a trophy, Sheryl won several trips, an appearance on Soultrain, several gifts and a scholarship.

HJTTI has assisted in raising the academic achievements of young ladies and reduced dropout rates, pregnancy and drug abuse through boosting the inbred talents inner city youths possess. HJ TTI has been proven to help young ladies improve their communicative skills; assists in developing performing talents; builds self-esteem, self-confidence, self-discipline and positive values which in turn improve their educational pursuits. HJ TTI's objectives are accomplished by providing scholarships to assist in their education and through comprehensive workshops and seminars conducted by professionals and role models.

OMG!!!!! It's the crazy fan from the MJ Fan Club VH1 special.That was pure dedication on his part.

OMG!!!!! It's the crazy fan from the MJ Fan Club VH1 special.That was pure dedication on his part.
Click to expand...

That special lord, what was the name of it? been looking for that for the longest time, I remember seeing it on TV years ago "An old friend of mine just sent me these pictures from 1984.

This was on the stage of the Michael Jackson Victory tour.

It was the start of my career and a magical friendship that would last 26 years.

I remember this moment as if it was yesterday.

We were in Atlanta Georgia.

We were testing a new illusion I had just created.

Michael loved magic and we played around with new illusions all the time. After the tour finished we remained friends and created some pretty amazing illusions, one of which remains in my own live show today.

I also remember that I was not as afraid of working with a wild animal as I was of going up to the production manager and telling him that Michael wanted to do this very difficult stunt&#8230;. and that it was HIS idea, and not MY suggestion&#8221;.