Song Of The Week - Smile

So, took me a while to decide (shortlisted choices for those that care were Will You Be There, Jam & Another Part Of Me, but I&#8217;m feeling sentimental so I&#8217;ve gone with Smile.

A massive regret that we never got the short film or the performance at &#8216;One Night Only&#8217;. It was the first song I listened to on July 25th 2009 as it's probably his most poignant recording. The heartbreak & sadness behind the optimism is tangible. And obviously MJ nails it vocally as he pours the last 2 years of pain into it.

Here's what I've written before.

The Importance of Smile

Michael Jackson's Smile has always been one of my favourite records. Like many of my favourite MJ songs, I can remember hearing it for the first time, on the day HIStory was released when I ran to my room to play the album in its entirety.

To put Smile into perspective, you need to put the HIStory album into perspective. After the 1993 allegations, nothing about Michael Jackson would ever be the same, and that includes his music. Dangerous had already seen Michael move into darker territory; from light, pop melodies to a more sinister, anguished, socially conscious terrain.

With HIStory Michael went into full victim mentality, I've said before that if you want to know exactly how he felt following the occurrences of 1993, just listen to this album, it's the most auto-biographical he's ever been. In essence, it's a concept album with at least 8 of the tracks dealing directly with the allegations.

As such, it's a brilliant but very angry album. It's filled with hurt, hate, anguish, defiance and distress. Press play and after the initial distortion the first sound you hear is Michael Jackson screaming, setting the scene for songs like Scream, They Don't Care About Us, the beautiful but haunting Stranger in Moscow, D.S. This Time Around, 2 Bad &#8211; all songs answering his critics but all following the same themes. Only You Are Not Alone provides the listener with a respite from the album's theme, even songs not dealing directly with 1993 still show Michael's anger & feelings about the state of the world; Earth Song, Childhood & Little Susie.

Then we come to Smile, notable in itself being a cover version which up until Come Together had been absent on an adult Michael Jackson album, but also a song that the vast majority of listeners will not have heard.

After 70 minutes of Michael revealing himself to be tormented, lonely, fragile and hurt, he tells us that actually, life ain't so bad. The theme of anger is replaced by beauty. Beauty in the instrumentation, production and that sweet, sweet voice.

Lyrically, it's painfully obvious why Michael finally chose to record Smile for HIStory. He's telling us, and reminding himself, that despite all that's happened to him, he's the eternal optimist.

"Smile, though your heart is aching
Smile, even though it's breaking
When there are clouds in the sky
You'll get by...
If you smile
With your fear and sorrow
Smile and maybe tomorrow
You'll find that life is still worthwhile if you just smile"

MattyJam said:
Take it upon yourself why don't you Tony!! I think you'll find I have full legal rights to all MJJC Song Of The Week threads, after brokering a five year, 43 thread deal with innuendo (whose idea it was).
Click to expand...

Definition of a week= 7 days (ask Craig David, if you don't believe me)

You do the math.

The 3 of you should get together weekly for this and each write your thoughts. These reflections are great to read haha

MattyJam said:
Excuse me, if SOTW gets delayed while Mrs Jam has my baby!!!
Click to expand...

I have to ask, did your wife 'Smile while her waters were breaking'?

Tony- Great choice, and I think like yourself, this is a hugely important song in Michael's career.

I wont repeat most of what Tony said about HIStory, but I definitely consider it to be a concept album, and the closet thing to a biopic we ever got.

As Tony said, we cover the anger, heartache, isolation and fury, but we also get a glimpse of the positive, with YANA and HIStory. All songs tie in some way with Michael's life in 1995.

Then we come to the last 3 songs of the album, and the sequencing - HIStory, Little Susie, Smile. To me, Michael's personal story of the album ends with HIStory, while not a song of triumph, it;s a song of determination. He is not quite saying he has "won" after everything that's happened.

Moving on to Little Susie, we are brought back down to "normal level" and are told the sad simple story of a child who comes to a tragic and regrettable end. This highlights that although MJ has acknowleged that whats come to pass has just done that, and everything you do makes you and what you are, it's like he is reminded of those who can't. A little girl putting personal issues into perspective.

Then we come to Smile... This is the most heartbreaking and uplifting end to an album. Simply, Michael is saying that's all there is to do. It's not saying he's standing smiling because he wants to, he's saying that he's smiling because he needs to, and thankfully, he had something to smile about, which was that he was alive.

Michael could have ended the album with HIStory, leaving us with an optimistic hope- or something like This Time Around or 2 Bad where he is essentially up front and taking on the world. I think Smile cuts through every song in HIStory, showing that underneath the anger, bravado and furstration, that even at his most angriest, he still manages not to forget the most important thing- which is to realise that there is something to smile about.

I think its the most perfect cover choice and album closer for HIStory. It strips Michael back, literally to basics, a song with the most simple (yet gorgeous) lyrics, no metaphor, no innuendo, no clever phrases. HIStory end with an important lesson, which is never to forget that you have something to smile about even in the worst of situations.

^ Like we've said before the trackisting order on HIStory is perfect, for a 15 track album that's some going.

At the front end, possibly his strongest First three of any of his albums. The last three then take the hurt and vitriol and turn it into optimism tinged with darkness.

But to start with a Scream and end with a Smile.....genius.

respect77 said:
As someone pointed out once: on HIStory we go to a journey with Michael that starts with a Scream and ends with a Smile.
Click to expand...


Tony R said:
But to start with a Scream and end with a Smile.....genius.
Click to expand...

I still turn this up way loud in my car just to hear that "inaudible, breathy giggle," as Matty says. And the song is lovely and pure. I've heard other versions, but Michael's is the best.

Smile is so beautifully sung, on the face of it the lyrics are so beautiful and uplifting but the pain you can hear is palpable. I've listened to this song in some sad times of my own and it's really very powerful. It's just so genuine and touching and you can tell Michael had his own reasonings for choosing to record and include this song.

I just listened to it again to make sure I was familiar with the laugh at the end! I must admit that I had never paid much thought to the album starting with a scream and ending with a smile, I really like that.

Smile makes me feel sad sometimes, though it's meant to be happy. To me, I look at it like smiling as a way to cover up your problems. Makes me think of my grandma who smiles all the time, but she can't possibly be happy all the time. Maybe I don't agree with Michael to a certain degree about the lyrics. Although, I do believe in taking notice of the positive things in your life too, no matter how small they might be. Beautiful song though.

MattyJam said:
I loved the photo shoot he did for the single cover. I've never been a major collector, but the CD single of Smile was always something I wanted. 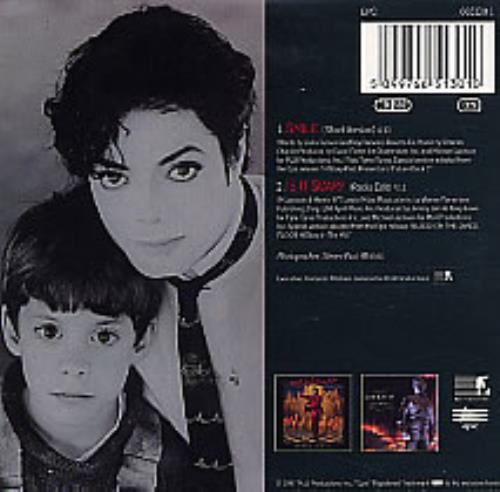 Too bad it costs a squajillion euro to buy.

^^^^ I'm a keen collector with a rare glimpse of sense. I'd like to see through my thirties with a roof.

MattyJam;4190616 said:
Makes me wonder about the possibilities of the music video. I think a video was in the works and I remember MJNI reporting that a special Top Of The Pops performance was planned (which would've been MJs first appearance on that show since Rockin Robin), but these things ended up being cancelled as Prince became ill. Too bad, because it sounds magical.
Click to expand...

A music clip was definitely in the works, but all the problems regarding the further promotion of MJ’s ‘Smile’ (single, music clip, live performances, etc) come down solely to conflicts from Chaplin’s estate (rather than to other issues, like Prince’s illness).

MJ was about to interpret specific Chaplin’s characters (such as, ‘Little Tramp’) in a different way while promoting that song (both in his music clip but also on-stage). For that reason, MJ was also about to use the techniques of computer-generated imagery (CGI) for the thematic purposes of the ‘Smile’ song.

But Chaplin’s Estate did not want that at all & raised objections by issuing orders that prohibited any further promotion of that song.

Hence, any promotion of the ‘Smile’ song ended abruptly.

But, as we know, few ‘Smile’ CD singles had already been released (before the aforementioned conflicts) & became extremely rare items among his fans.

MattyJam said:
I loved the photo shoot he did for the single cover. I've never been a major collector, but the CD single of Smile was always something I wanted.
Click to expand...

Yeah, I always wanted one of those, I've got every CD single he ever did (plus many on vinyl) and loved the cover.

Should have had this as last single instead of that HIStory remix.

A great great way to end the angry HIStory album. Optimistic for the future.