The Music Of Jermaine LaJaune

moonstruck87;4180139 said:
I saw the show on TV yesterday and enjoyed him being interviewd. He seems to be always so polite and comes across as balanced and smart. But when he started "I´ll be There", I just switched channels. I don´t like him singing the songs that were sung by Michael and live through Michael´s voice. :-(

Would have watched his other performance, though, but I missed that one.
Click to expand...

Or maybe he is giving a tribute to his little brother and not trying to live through Michael's voice. And let's not forget that Jermaine also sings on I'll Be There.

Blue Criminal said:
Or maybe he is giving a tribute to his little brother and not trying to live through Michael's voice. And let's not forget that Jermaine also sings on I'll Be There.
Click to expand...

My vote would go for this particular option :yes: Jermaine did great on both songs. He's got some cool solo numbers and that particular tune really rocks. I'll be there is part of the shared J5 legacy and Jermaine has every right to sing it. I bet Michael wouldn't mind it one bit and would be proud to see his brother(s) carrying on. After all, he used to have the J5 medley on his solo tours.

I Think It's Love

The first collaboration beteen JHH Entertainment Ltd. and Memorigin. After extensive R&D spanning the globe, Memorigin is proud to present the Jelephant Tourbillon Watch designed by Jermaine Jackson. "Jelephant" is strong and durable, never forgets. It is timeless with amazing memories. This is the "Jelephant - Time that never forgets!" An icon under JHH Entertainment Ltd. The "Jelepahnt" logo engraved on the dial is a symbol of wisdom, power and long lasting, and these are the same elements of watchmaking. Its unique design is a testament to the painstaking attention to detail and dedicated craftmanship of Jermaine and design team. Through this trusted team, the tourbillon's polishing, assembly and quality control is overseen by master watchmakers and their teams to ensure the "perfection of art". http://www.memorigin-us.com

at first I was like "did he say jellyfish?" lol

Jermaine Jackson is in Cannes, southern France. On May 24th, he attended a press meeting for World Peace Night at Villa Oxygène. In the afternoon, Jermaine and his girlfriend Maday Velázquez walked the red carpet at the 70th edition of the Cannes Film Festival in Cannes for the screening of the film 'The Beguiled'. Both were wearing fashion custom made by German designer Marcell von Berlin couture available at Ivan Bitton Style House.

In the evening, Jermaine and Maday returned to Villa Oxygène to attend World Peace Night, a charity event as part of Adventure of Humanity, where Jermaine also took the stage and performed. The Adventure of Humanity is a none profit project started by Michael Jackson and Nelson Mandela in 1999 and is organized today by Richard Nilsson.

On May 26th, Jermaine Jackson is a special VIP guest at the businesstainment Villa & Friends Party in Cannes powered by Lambertz and hosted by Nana Domena of LifeStyler TV. For photos and videos of Jermaine's trip to Cannes, visit Facebook page @JermaineJackson5. 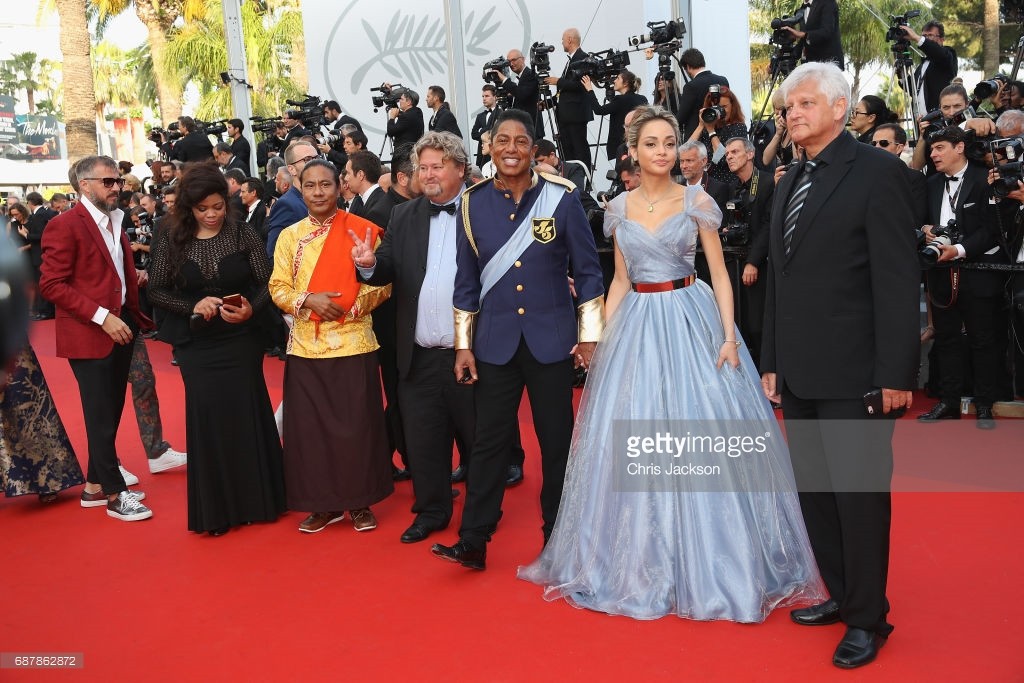 ^^The Beguiled? Are they re-releasing the old Clint Eastwood movie?

DuranDuran;4195231 said:
^^The Beguiled? Are they re-releasing the old Clint Eastwood movie?
Click to expand...

In the 1971 version of The Beguiled, its noted that Eastwood&#8217;s character is manipulating the women who are portrayed as nothing more but crazy and full of lust. Coppola shifts this narrative and leans more towards a &#8220;who&#8217;s zoomin&#8217; who?&#8221; story and unpacks it from the female perspective. It is clear that Nicole Kidman, Kirsten Dunst, and Elle Fanning&#8217;s characters are more nuanced and have more control in this version. Zacharek dissects this in her review saying, &#8220;If men are manipulators, as many of our mothers have taught us, there&#8217;s a dark side to female desire, too. That may be what this sly, elegant picture is really about: The horror that the more we try to control nature, the wilder it grows, like vines spiraling out of control from between our fingers.&#8221;

She continues, &#8220;Coppola&#8217;s version works much better for the way it subtly nudges our sympathies, sometimes in conflicting directions. This Beguiled is neither anti-man nor anti-woman. Both men and women love the thrill of the chase, and each side has plenty to lose.&#8221; So basically, she&#8217;s saying that everyone in this movie is crazy &#8212; which makes for a good movie-going experience.
Click to expand...

Jermaine Jackson and his longtime girlfriend Maday Velázquez posed on the red carpet at the 70th Annual Cannes Film Festival in Cannes, France Wednesday. The 61-year-old Gary Indiana native has been dating 23-year-old Velázquez since before his estranged wife, Halima Rashid, filed for divorce in 2016.

Jackson couldn&#8217;t stop grinning as his beautiful girlfriend turned this way and that way for the photogs lining the red carpet. But she wasn&#8217;t amused when the confused photogs yelled out Halima&#8217;s name.

(There is a comment from someone who purports to be her 'ex', in the link comments)

Maday seems to have appeared on a celebrity 'Big Brother' TV programme, and was 'flirting' with someone else. :

Carlos Russe, three-year-old boyfriend of Maday confronted him and said: "I think you were wrong person. A relationship of three years is respected because she told you from the beginning in the house.

Also:
In the U.S., she isn't known, but if you visit Spain, she's a very controversial reality TV star who was on a recent season of Gran Hermano, which is the Spanish language version of the Big Brother reality show franchise.

When The Rain Begins To Fall (with Pia Zadora)

Do You Remember Me / I Think It's Love

performance on the TV show Tocata in April 1986

The Let's Get Serious album has been re-issued on CD as part of the Motown 50 campaign, and it's been on iTunes for several years, fortunately. But all this time and still no CD and iTunes releases for these albums:
"Come Into My Life" 1973
"My Name Is Jermaine" 1976
"Feel The Fire" 1977 (his first songwriting and producing credits)
"Frontiers" 1978 (a really great album!!)
"Jermaine" 1980
"I Like Your Style" 1981
"Let Me Tickle Your Fancy" 1982: Now this one is a real no-brainer since it was one of his more successful albums (top 50 on the Billboard 200) and more importantly is consistently great from start to finish. Can't some re-issue label like Funky Town Grooves take care of this? While they're at it, they could put out Marlon's album too.

Let Me Tickle Your Fancy

Do What You Do

Thanks so much for the reminder, terrell. To be honest, I had forgotten it was Jermaine's birthday today. Blessings to him!!!!

I've always loved this duet from him.....

Girl said:
Thanks so much for the reminder, terrell. To be honest, I had forgotten it was Jermaine's birthday today. Blessings to him!!!!

I've always loved this duet from him.....

Thank you Jermaine for all the great music and Happy Birthday