youtube;Ud4D1XlPYuw]Arya had to work as a begging elephant for many years and she was rescued from that life 3 weeks ago.She still has the bell around her neck but they don´t take it off at once. the reason for that is the bell is familiar to her but everything else is new to her.they take it off when she´s more used to the place.
Last edited: May 18, 2022

This is the story about Emma´s rescue, and what she had to deal with earlier
=youtube;LSd1hV7rs08]
Emma after treatments.
=youtube;i_d122pEzwA]
Last edited: Oct 11, 2021

As we are reminded time and again, snares are an incredibly cruel threat to wildlife. Laid by poachers, these simple loops, made from either wire, cable, rope or nylon, lie in wait to entangle any unsuspecting creature who crosses their path.

If you wonder why they left the baby elephant to fend for itself...mum was there-

"The calfÂ’s mother had valiantly attempted to free her baby, as indicated by broken vegetation all around the site. That made it all the more gratifying to watch the calf run off into the forest once he was revived, making a beeline for his mother. We can only imagine how relieved she was to see her beloved baby emerge through the trees and be reunited at last. For the team, they were left feeling a sense of accomplishment, thankful to be in a position to right such wrongs so that this elephant family could remain intact".
:lovev1:
Last edited: Oct 11, 2021

"Water is life
Working in dry and arid environments, we know just how important water is to wildlife. So, to stop animal suffering during this long dry season, we've added four new boreholes during 2021. These fill water troughs that have been specially built in conservation areas to give access to all wildlife, including smaller birds and animals. Suffice to say, these new additions have been a literal lifeline in the Tsavo Conservation Area where the traditional ‘short’ rains have, so far, failed to materialise. Accordingly, reports from the field show animals have been arriving in their droves to quench their thirst. Seeing animals coming to use these watering points (the majority of which are powered sustainably) is especially rewarding given the hard work that goes on behind the scenes: Every borehole, windmill and trough we build is fully maintained and serviced regularly to ensure they remain in working order!
It’s all part of our work to care for nature through daily actions. To support our Water for Wildlife projects, and help us minimise animal suffering as we wait for the rains, visit: https://www.sheldrickwildlifetrust.org/.../water-for.."

The first elephant has arrived to Elephant haven in France

This week an historic case will be heard in New York’s highest court – to free Happy the elephant.
The Nonhuman Rights Project will argue on behalf of Happy, for her release from the Bronx Zoo to a sanctuary, in what is being called the most important animal-rights case of the 21st century.
Happy has been imprisoned at the zoo for 45 years – the last 16 of those have been all on her own, despite elephants being known for their life-long family bonds, their intelligence, and their social nature. Happy can only be so in name while she is deprived of her freedom.
The Non-Human Rights Project will begin their argument for Happy tomorrow. If you would like to keep up to date with their work, and a potential ground-breaking change for captive animals, you can do so here

And to learn more about animal captivity, you can visit our feature

"We haven't had a flood at Elephant Nature Park as big as this for many years. All animals were moved to safe locations. We have been ever watchful, day and night, for further rising water levels, which might necessitate more relocations of animals."

I´m afraid that Pocha only got about 5 months at the sanctuary but during that time she got friends.

It is with heavy hearts that we announce this morning that Pocha passed away last evening. While we don’t yet know the cause of death, a necropsy will be done shortly to help us determine what happened - though we may not have results right away.
While Pocha was in Mendoza we did, on occasion, see small signs that made us worry that she had underlying health issues, but nothing was ever diagnosed. When she and Guillermina arrived here at Elephant Sanctuary Brazil, she had had an instance where she became tired and was a little slower to eat but, after a multivitamin shot, she improved. A few days ago, we noticed that she was picky with her hay, though she was still grazing and enjoying all of the produce that she was given. After a vitamin shot last night, she looked brighter and, though still tired, had more light in her eyes. However, when we returned to check on her later in the evening, we found that she had passed.
Guillermina, who was sharing the yards near the barn with her mother, gave long rumbles to call her friends - and you could hear them rumbling back to her. Once we opened the gates for the other girls to enter, Bambi, Mara, and Rana were there waiting to be with Guille. Rana walked over to Pocha with Guillermina for a few minutes and then went back to the others. Next, Bambi walked over, but stayed at a distance, somewhat wide-eyed and looking concerned. After Bambi returned to the other girls, Mara came and stayed with Guille and Pocha. After that, one by one, the other girls returned, this time Bambi backing up to Pocha, smelling her and caressing her face. Just after midnight, they all stood on different sides of Pocha, quiet and relaxed, having one of those elephant moments that only they understand. A little before 4 am, Maia also came to be with Guillermina.
Each girl stood nearby, some longer than others, and observed Pocha’s body with respect. Elephants have an innate ability to communicate with each other in ways we will never understand and that’s what appeared to be happening among this group of herd mates. With all of our years working with elephants, we have never seen this level of herd support given to another during a passing. Their support is proving much more familial in nature than we have witnessed at sanctuary in the past and, although sad, there is also something incredibly beautiful about what is taking place.
As she is coming to understand what has happened to Pocha, Guillermina has been very gentle with her mother. She touches her and smells her and caresses her with her trunk, seeming to sense that her mother is no longer of this earth. While Guille didn’t stand completely over her mother’s body (which elephants sometimes do), she did very gently maneuver her feet over Pocha’s front legs and stayed there for a while.
Though this is a difficult time and it can be hard to process such a loss, we have gratitude toward Pocha for the love and stability she was able to provide to Guillermina for 24 years. Once the two were at sanctuary, she was able to see her daughter experience true joy and begin to build relationships with other elephants - something that might have only been a dream for Pocha. There were moments when you could see Pocha watching Guille with the other elephants, and she had the brightest look on her face. We also hold a great sense of relief that both made the journey to sanctuary before Pocha’s passing, so that Guillermina is not processing her grief alone; she now has other elephants to turn to. Perhaps Pocha had a sense that her time at sanctuary was short and encouraged Guille to branch out, enjoy life with friends, explore nature, and truly discover what life as an elephant is meant to be. In a few short months, she was able to remember that the world was more than just a concrete wall in front of her. In actuality, life could be big and beautiful and filled with opportunity - and she was also able to give that big life to her daughter with love and a sense of immense pride. 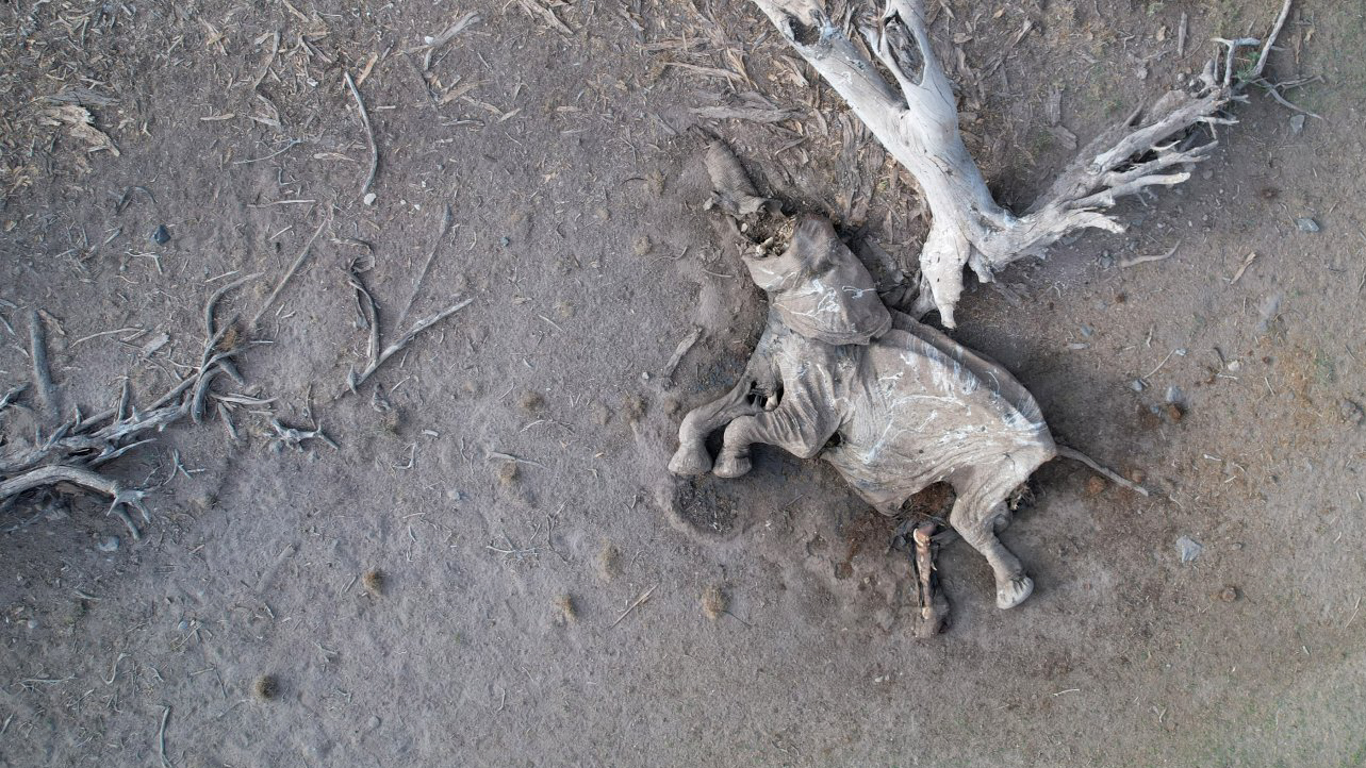 One of the worst droughts to ever hit East Africa is wiping out Kenya's elephants at a staggering rate. The cracked and parched landscape is barren, but for

Elephants need safe habitat in order to thrive. That's why IFAW teamed up with African Parks and the DNPW Malawi to relocate over 260 elephants from areas where they were at risk to the safety of Kasungu National Park. The translocation is part of a national conservation initiative to maintain healthy habitats in Malawi’s national parks, establish viable elephant populations, and ensure the prosperity of local communities living around the parks.

Moti is an elephant bull, 35 years old. He had to work until he collapsed. It was so painful for him so he coudn't eat.
Wildlife SOS is there and have given him strong pain medicine and antibiotics and he has started to eat a little.They need to get him stronger so he can stand to be able to take him in an Elephant ambulance to the Elephant hospital.They do their best but they don't know if they can save him.

Moti Update: We thought you would like to see Moti resting peacefully. A softer bed with straw was put down for him and he was covered with blankets and a tarp to keep him warm. Sweet dreams Moti!
Please remind your family and friends to Refuse to Ride elephants and sign our petition. Thank you!
https://action.wildlifesos.org/page/74446/action/1...

Moti Update: Many of you have asked what happened to him. What we are seeing is that his foot pad has torn away from the base of his foot and the excruciating pain he was experiencing likely caused him to collapse. However, we are still trying to get x-rays to understand what underlying skeletal issues he is having as well.
Foot problems tend to be the biggest problems we see with captive elephants. They are forced to walk on hot tarmac roads. Walking on roads often leads to foreign objects like glass getting embedded in their feet. It also can create burns from the hot surfaces. We ask you to spread the message to 'Refuse to Ride Elephants'. We will continue to update you on Moti's progress. We hope to get images of his most involved leg today.
https://action.wildlifesos.org/page/74446/action/1...