Luvin' the 1st single, its really growing on me. Keep positive, having high hopes to this album, the response is really good.! Hope it will continue. Such a really gud day for us fans...keep michaeling!

'Love never felt so good' now has over 150,000 views on #Vevo less than 12 hours after its release. #MJXSCAPE pic.twitter.com/z8zy4I1Onq

Why there is no promotion for Love Never Felt So Good and Xscape on main page of iTunes? It iritates me a little bit...

So happy for the album, and the single is so good (I prefer Timbland version). LNFSG (with JT) has just reached 6th place on Polish iTunes (and 20th).

I'm performing the song at school on Friday! Hopefully everyone will love the new song as there are a few who already heard it and love it! yeah, they're in the way too on danish itunes :bugeyed

Should be fine once XSCAPE releases, it's only like that because Coldplay's album just came out if I'm not mistaken.

According to a friend of mine in DC, local radio is playing MJ & JT version of LNFSG in heavy rotation - every 10th song.

I am starting to warm to the new version of 'LNFSG' a lot more! the production is great, the work they did on the song (being sourced from a tape) is wonderful. I love the additional instruments they used, as well as keeping the authentic ''MICHAEL JACKSON SOUND'' Michael sure would be proud. Solo Version is No. 25 on iTunes UK.

^ @BUMPER
wanna express somethin'?
Or are you now in a constantly ":naughty:"-mood?

EDIT: Bumper's edited his previous post. I assume he isn't in ":naughty:"-mood anymore. 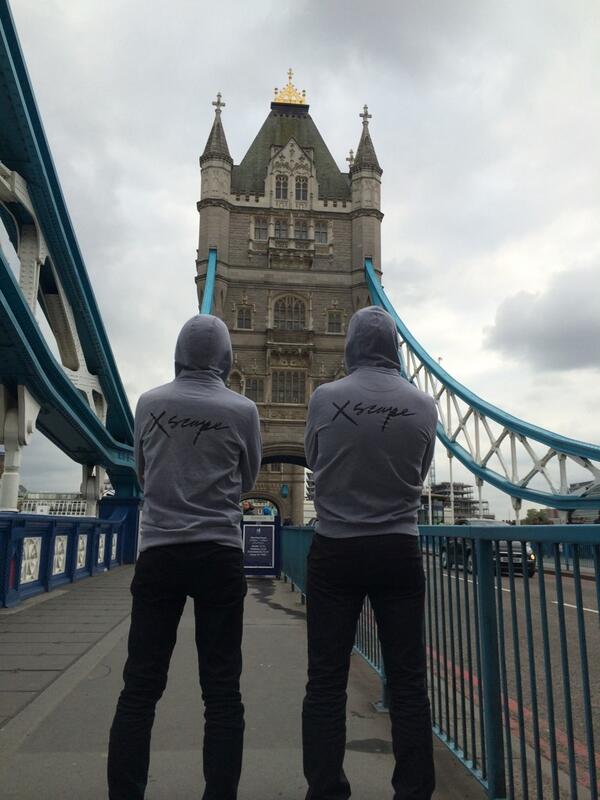 Oh I it's not that I wish or need those hoodies, but I WANT THEM RIGHT NOW!!!!!!

That's great news! Just like how the standard and deluxe version is being counted as one... great!!

According to a friend of mine in DC, local radio is playing MJ & JT version of LNFSG in heavy rotation - every 10th song.
Click to expand...

LOL. It's Hot 99.5 station. Apparently they are playing it once every hour or so.

The album XSCAPE deluxe edition is now #35 on the Canadian I-Tunes... up over 120 positions since 12 hours ago.

Also, the MJ & JT track Love Never Felt So Good continues to rise and is now at #14 here.


coffre said:
^ @BUMPER
wanna express somethin'?
Or are you now in a constantly ":naughty:"-mood?

EDIT: Bumper's edited his previous post. I assume he isn't in ":naughty:"-mood anymore.

I am always in :naughty: mood :hiya:

Rodney Jerkins about his work with MJ

New York: When Michael Jackson's record label released his first posthumous album in 2010, a year after the King of Pop's sudden death, producer Rodney "Darkchild" Jerkins was asked to work on the project.

"I was asked to be on that album and to produce like five songs, but I turned it down," he said. "I just felt like it wasn't time."

Years later, the hitmaker for Destiny's Child and Whitney Houston - who worked heavily on Jackson's 2001 comeback album "Invincible" - says he now feels comfortable producing Jackson's music again. He produced the title track from the upcoming album, "Xscape," out May 13.

"Xscape" was executive produced by Timbaland and includes songs Jackson recorded in the 1980s and 1990s. Some of the tracks are taken from early recording sessions for successful albums such as "Bad" and "Dangerous."

The first single, "Love Never Felt So Good," was written with Paul Anka. A bonus version of the track features Justin Timberlake.

Jerkins said he and Jackson originally started work on the song "Xscape" in 1999 when they recorded the "Invincible" album. He revisited the track in 2003 and retouched it this year for the new 8-track album.

"Even when Michael was alive, we never stopped working on the song 'Xscape,'" he said. "It was one of those songs where he specifically said to me, 'It has to see the light of day one day.'"

Jerkins said he visited Jackson in 2007 in Ireland where they were "vibing out," but didn't focus on creating music exclusively.

Jerkins, who has produced hits for Jennifer Lopez, Beyonce and Brandy, is currently working on new music with Rihanna and Ariana Grande. He said he was initially nervous about including "Xscape" on the Jackson album, which also includes a song produced by StarGate, who Jackson initially wanted to collaborate with in 2007 because of the Swedish team's work with Ne-Yo.

But after the hearing the full record, he relaxed.

"Everyone did a really great job on this project," he said.
Click to expand...

It would seem Michael Jackson is living up to his title of the king of pop posthumously.

The multi-talented star, who died in June 2009, has been featured on a new duet alongside Justin Timberlake called Love Never Felt So Good.

The track is one of eight that will appear on the former Jackson Five singer’s posthumous Xsape album set for release on 9 May in the UK.

The feel-good track starts with a Billie Jean-esque heavy beat kicking through Justin’s spoken word, saying: ‘Come on, let me see you move’.

And then the verse begins with Micheal’s voice belting out the romantic tune with lyrics like, ‘Baby, love never felt so good and I'd die if it ever could not like you hold me, hold me’.

The track debuted at the iHeartRadio Music Awards – aired on American TV channel NBC on Thursday evening - was written by Paul Anika and originally recorded by Jackson in 1983.

Released at midnight, it’s been widely acknowledged as a big hit by the fans with many excited by the prospect of a whole new album dropping at the end of the month.

And fans of the king of pop took to social media in their thousands, telling the world how they felt about the new single.

And on Thursday night, Usher paid tribute to the late legend at the iHeart Music Awards in Los Angeles, California.

Fans of Michael not only got to hear the star's latest single but also got to see it performed live on stage... They love it: Released at midnight, it's been widely acknowledged as a big hit by the fans with many excited by the prospect of a whole new album dropping at the end of the month

I gotta say it guys, You guys are great! Such an honor to be a part of this community.

Now lets get Michael to number one!

Base.com have the best price for UK customers, will be pre ordering it from there! as soon as it arrives, i'll be blasting all 17 song's through my hi-fi system on max volume.

Omg, I see one of our members in that Twitter timeline there! LOL hi @michaelsson (@_MouthLikeLicka) ! :lol:

Bbc radio 2 has got lnfsg, the mj version i think, as its record of the week starting tomorrow.
http://www.bbc.co.uk/radio2/playlist

Just listened to mjs versions and im impressed a great foot tapping song. they did a good job. not intrested in hearing timberlake who needs a lada when u can have a rolls royce


Regarding the new album... I'm really interested in hearing Blue Gangsta. Ever since I read the review saying it started with a rainy/moody intro and MJ surprises our ears with an acapella. Looking forward to that track amongst others!
Click to expand...

I'm really appreciating how they are handling this release.. And I can't forget I mention I love the production of the song so far, they did not over product and change the song into something different.. They really did just contemporize it like try said they were doing
You must log in or register to reply here.
Share:
Facebook Twitter Reddit Pinterest Tumblr WhatsApp Email Share Link
Top