It's been 25 years since Candy Girl came out in 1983. They're going on a tour this fall and there are plans on a movie. Here are some comments about them: Every good DJ knows the way to get any party started is by throwing on a record from our favorite boys from Beantown. Since the Jackson 5, no other group has influenced us like Ronnie, Bobby, Ricky, Mike, Ralph and Johnny. This year, New Edition celebrates 25 years in the game. These trailblazers managed to survive solo careers, bankruptcy, drug addiction and…Jherri curls. We asked celeb fans Bow Wow, Omarion, Kirk Franklin and more to tell us about their favorite New Edition memories:

“My first memory of New Edition is all the posters my aunt had on her bedroom wall. I actually remade "Candy Girl" on my second album, Doggy Bag. When a New Edition song comes on the radio [now] people still remember where they were and what they were doing at that time.”
—rapper/actor, Bow Wow

“I fell in love with Ralph’s voice when I first heard "Is This The End" back in the 80s. Then I saw the video and was in awe. Their N.E. Heartbreak album talked about the different stages of love. Their songs are memorable and their subject matter is very relatable.”
—R&B singer, Deborah Cox

“I was on the fence about liking New Edition initially but then the video for "Popcorn Love" came out and I was in! So much was taking place when their music was being played *- good memories -- and their music brings it all back to life.”
—music producer, Jermaine Dupri

“New Edition influenced me to put Dax in my hair! "Candy Girl" reminds me of when I was on the playground chasing after all of the girls. New Edition's music is universal and has inspired many young R&B singers.”
- actor, Mike Epps

“My favorite memory of New Edition was dancing on Soul Train in high school when [they performed as] the featured artists. I loved their chemistry on stage. "My Prerogative" by Bobby Brown and "My, My, My" by Johnny Gill are in my iPod today.”
- actress, Wendy Raquel Robinson

“My first memory of New Edition was at a concert at Six Flags in Dallas when I was 15 years old. "Can You Stand The Rain" is my favorite N.E. song because of the chord changes and melodies. It sounds like a gospel song. They came from an era where there was true artistry.”
- gospel singer, Kirk Franklin

“New Edition can still tour now because their music and unity has stood the test of time.”
- R&B singer, Omarion Behind the Scenes With New Edition
Thursday, July 03, 2008

It took 25 years for it to happen. But the group New Edition, featuring Ronnie DeVoe, Ricky Bell, Michael Bivins, Ralph Tresvant, Johnny Gill, and Bobby Brown, has finally been recognized by its peers in the music industry.

The group, celebrating its 25th anniversary, recently received its first-ever award, the Golden Note Award, presented by the American Society of Composers, Authors and Publishers (ASCAP) during ASCAP’s 21st annual Rhythm and Soul Music Awards at the Beverly Hilton in Los Angeles.

“Considering New Edition was one of the pioneers of the modern music era, it feels like finally,” said Ronnie about the honor, given to songwriters, composers, and artists who have achieved extraordinary career milestones.

Johnny said, “We were honored and elated, but at the same time, it was like ‘Whew, it’s about time!’ It was long overdue. We are fortunate and blessed to all be here and see it and to touch and feel that moment that we all worked for.”

The fellas assembled three hours before they were to be honored so that they could meet with Ebony/Jet staff photographer Valerie Goodloe to do a special, cover photo shoot for this week’s issue.

“They were energetic and very family like,” said Goodloe. “They were patient. They didn’t take away from my time. They were willing to do what they had to do to get the shot. They were cordial, well mannered and a professional group. They grew into manhood really well. Each one has his own identity. They’ve gone on to do their own things but were able to come back together. They were very brotherly. You can tell they enjoy being around each other. They are a class act.”

Location
In my own universe

New Edition were one of the few groups to have all of its six members successfully record solo/splinter work.

Damn, even Bobby is with it?? The "Home Again" album was great.

A. Sizzle said:
Damn, even Bobby is with it?? The "Home Again" album was great.
Click to expand...

Bobby is always a member, sometimes he participates and sometimes he doesn't, lol. A few days after this award show, the group recorded a song with New Kids On The Block, but Bobby wasn't there. NE is in the current issue of Jet. According to the article, they're going on a tour in the fall, but Bobby hasn't signed up yet.
Last edited: Jul 15, 2008
M

the only act for my money from the 80's that still got there best stuff ahead if they ever get the right writers and Production. they are still badd and never lost it. these Brothers are badd period.

mistermaxxx said:
the only act for my money from the 80's that still got there best stuff ahead if they ever get the right writers and Production. they are still badd and never lost it. these Brothers are badd period.
Click to expand...

Puffy P. Diddy screwed them over with that last album. Johnny said that Diddy wanted them to record these teenybop songs, when the group wanted to record mature adult material. Then Diddy put the album out and didn't promote it. I was surprised that NE has never won an award before this ASCAP one.

DuranDuran said:
Puffy P. Diddy screwed them over with that last album. Johnny said that Diddy wanted them to record these teenybop songs, when the group wanted to record mature adult material. Then Diddy put the album out and didn't promote it. I was surprised that NE has never won an award before this ASCAP one.
Click to expand...

they have always gotten screwed over by folks and they have also been there own worst enemy as well. yeah Puffy wanted a B2K type of album out of them and Puffy turned down a track that Jam and Lewis submitted because Puffy didn't feel it was street enough.

word is that NE are signed to Aftermath records Dr Dre's label.

i wasn't surprised at all that the industry ignored them when it came to awards so much politics in the game.

How much do we love this? Gone Country castmates Maureen McCormick, Bobby Brown, and Carnie Wilson are reuniting for another CMT reality show, Outsider's Inn. Apparently, McCormick has decided to operate a bed & breakfast in rural Newport, Tenn., and calls in Brown and Wilson for reinforcements. According to the press release, "McCormick takes over management of the Inn and property; Brown becomes entertainment director; and Wilson assumes the role of master chef." Shooting has already begun, and the first of eight episodes will premiere August 15.
Last edited: Jul 27, 2008

One of my all time favorite male groups.
Maxxx said he isn't surprised about the nix on the awards,
but I sure was! I coulda sworn they got something!
They really deserved it.

Good Boys- the rare b-side of Count Me Out
http://www.youtube.com/watch?v=1frUdydC1Z8
S

I like New Edition, and many of the members' solo efforts. My favorite solo album by far is Ralph Tresvant's self-titled album. MJ penned a track on there, "Do What I Gotta Do". Very good stuff.

I also like some of their covers: "Duke Of Earl" and "Earth Angel" especially.

Here's a classic from JG

Wow, 25 years?! That's crazy. I love New Edition though. I think they are underrated outside the r&b community which is too bad, all the members are talented and they've released some really good material over the years. Pretty good performers too.
R

ooh my god i love there songs i remember them i always listening to there musics all the time long time ago know they're back that's cool :yes: :clap:

i can't wait for there cd :yes:

As the sun beamed above, the cool sounds of old-school R&B and soul acts kept the crowds mellow at Saturday’s Funk Fest concert at Jacksonville’s Metro Park.

People danced and sang along to girl group SWV, rapper Slick Rick and Maze featuring Frankie Beverly, the group so popular it closes out the Essence Music Festival in New Orleans every year.

During the heat of the day, people kept cool under hats or umbrellas, fanned themselves with corporate giveaways and blotted the sweat away with hand towels as the hosts on stage implored them to drink plenty of water.

Pronda Drayton, who lives on the Westside, had arrived when the gates opened at 3 p.m.

“You have to get in early to get up front and get a good seat,” she said.

For her efforts, she was able to find space for her chair and a friend’s only two rows behind the V.I.P. section. A couple hours later, Tonya Friend of the Northside had joined her. The two sat together on a bench people-watching and snacking on barbecue, fresh conch salad and fruity drinks.

Friend said she had come up with her own method to beat the heat.

The Funk Fest arrives in Jacksonville every May, one of four stops in the Southeast for the tour. This year the Jacksonville event was expanded to two days to allow for more acts.

Bobby Brown provided the highlight for Friday night, proposing to his girlfriend on stage as the crowd cheered him on.

Paul and Carol Pearsall, who lives on the Westside, said the proposal was shocking, as Brown got down on one knee to ask for his girlfriend’s hand in marriage.

“We shouted, we screamed,” Carol Pearsall said. “We supported him.”

“Hopefully he’ll get it right this time,” her husband quipped.

“It’s my surprise birthday present from my sisters,” she said.

Stroman wore a multi-colored hat that looked like a mini-umbrella to shade herself from the sun. She said she enjoyed the atmosphere at the concert.

“Everybody is so friendly,” she said. “And they have all the nice food and drinks.”

Ronald McBride traveled from West Palm Beach with a friend, meeting up in Jacksonville with another buddy from Tallahassee. She said he was impressed by the lineup of acts and decided to make the trip to attend both nights of the Funk Fest.

“The performances were great,” he said. “The weather was great once the sun went down.”
Bobby Brown proposes

JCE Films, a Division of Jesse Collins Entertainment to Produce 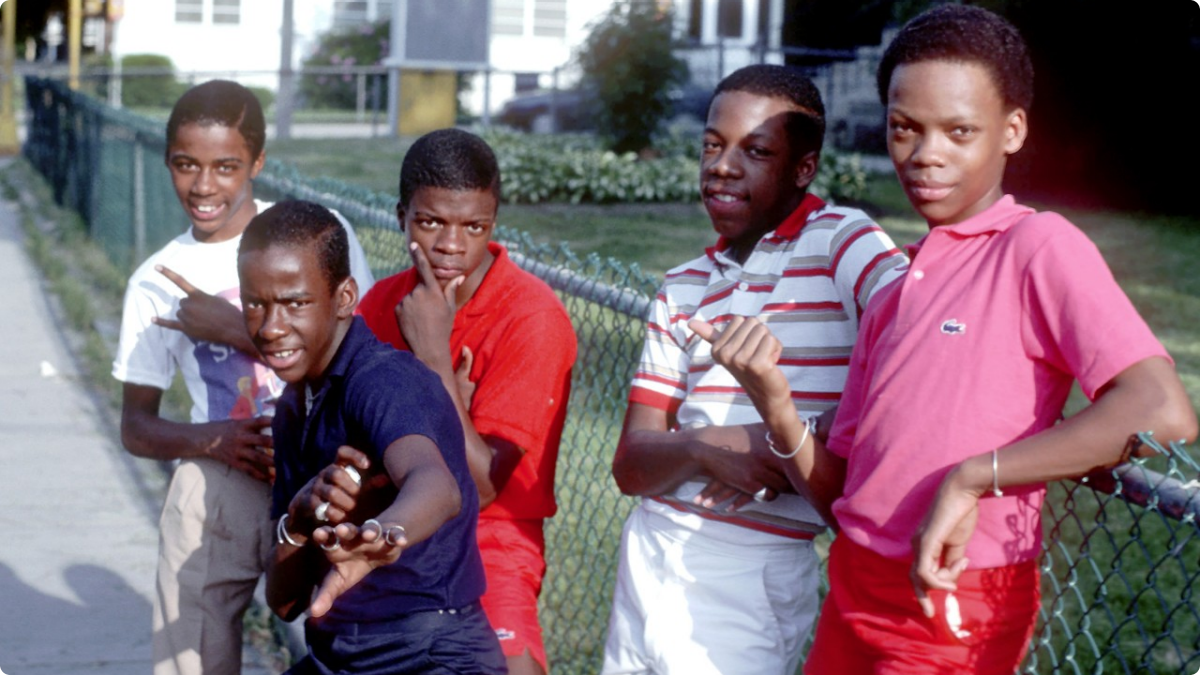 
New Edition laid the foundation for how modern-day boy bands look, feel, and sound. Boyz II Men, N’SYNC, The Backstreet Boys, and New Kids On The Block all took their cues from Ronnie, Bobby, Ricky, Mike, Ralph and Johnny. After 30 years of breaking hearts on the record and from the stage, New Edition finally gets the biopic that their stellar tenure in entertainment so richly deserves. This 3-part miniseries follows the group from their humble beginnings as kids in Boston to global megastardom - weathering the highs and lows of controversy, personnel changes, and the ultimate cost of fame.


“NEW EDITION: THE MOVIE” is executive produced by Jesse Collins (Real Husbands of Hollywood) for JCE Films, a division of Jesse Collins Entertainment; and directed by Chris Robinson (ATL).