Did Michael ever meet Charlie Chaplin?

I always thought no. I realise Michael spent some time at Charlie's home in Switzerland and met Oona but always thought Charlie had passed away by this point.

The Wikipedia article on Manoir de Ban (Charlie's Swiss home) claims that Charlie hosted many friends there in his last years "including Marlon Brando, Truman Capote and Michael Jackson". https://en.wikipedia.org/wiki/Manoir_de_Ban

For anyone who hasn't heard, the home was opened to the public this week along with a nearby multi-million pound museum on Charlie's life and art called Chaplin's World. I'm planning to make a trip over to Geneva in the coming months to see it all and visit Charlie's final resting place.

I do not think Michael met Charlie Chaplin either. There are pictures of Michael with the family but none with Charlie. 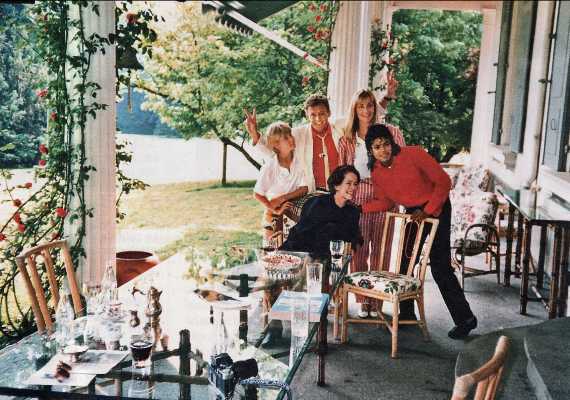 
Chris when you make that trip to Geneva it would be nice to put your pictures right here in this thread so we can see them.
Last edited: Apr 22, 2016

Not an answer to your question but here is a nice comment on MJ by Charlie Chaplin's granddaugher, Laura Chaplin.

“Michael Jackson came three times to the mansion, he was like a child” “I was about 12 years old when Michael Jackson came to the mansion. Subsequently, he called me almost every day to chat. He sent me incredible birthday gifts. Huge cartons. I went up on stage with him in Geneva. He was a great friend of the family. ” During his first visit, MJ had landed by helicopter in the garden of the domain. “I was pretty impressed,” said Laura. The King of Pop, too, but the big dogs. “We had nine dogs and he was afraid. We had to lock them up before it happens. “At the time of eating, seeing the big table, Jackson sat down with the children. “He was very shy. He was doing pirouettes in the garden. We played the PlayStation. He was a great kid. “Smile”, composed by my grandfather was one of his favorite tracks “
Click to expand...

Also I remember to have seen a note among the trial court docs which were notes of and e-mails from/to Evvy Tavasci, MJ's secretary and among those there was this note:

Michael Jackson was for sure one of the greatest fan of cHarles Chaplin.
He even befriended the Chaplin Family.
There are some photographs taken in early 70's (12/13 years old), with the pre teen Jackson drawing The Tramp.
Since then, he made numerous photographs and footages with him disguised in the Tramp.
Like he said in 2003 " Sometimes I thing I am really HIM".
Jackson identified himself with the political exilate who had to faced many trials and lies coming from officials and tabloids.

How mad Jackson was of Chaplin is an interesting story, that eventually damaged relations between Michael Jackson and Sony Music; and shows how much protective was the Chaplin'estate.

Jackson recorded a cover of SMILE in his album HISTORY, PAS PRESENT AND FUTURE BOOK 1, released in 1995; two years after the child molestations accusations.
This song has been recorded on a 90-tracks; Jackson picked up the second take of the song. His sound engineers recommanded him to use the first version instead...but to no avail.


HISTORY was (and still is)the most expensive album of all time with an estimated 40 millions spent in the promotion of the album.
By november 1997, two and a half years after its launching, the album sold 16 millions worldwide and produced almost ten singles.
Sony wanted to end the promotion of the album, but Jackson wanted SMILE to be released as a final single.
He also wanted another two millions of dollars to shoot a video to promote the single.
That would have been an useless expense for Sony, who didn't believe they could pay the bills with the results of the sales.

Nevertheless, MJ began to shoot the video with a child supposed to play a "KID", Jackson being disguised in the character of the TRAMP.

The idea of MJ was to being himself sent into some scenes of the movies from Chaplin, with the use of CGI.
That was going too far for the Chaplin's estate who didn't want the seriousness of the Chaplin movies to be played, neither to give the Tramp another interpretation.
Jackson wanted to dance with Chaplin, so one must guess that he wanted to use the "nonsense song" passage, among others.
One must confess that Jackson was very incredibly good at playing the Tramp; and knew perfectly the art of pantomime he developped throug his dance moves.


Jackson was very disappointed, and was angry at Sony...which yet had nothing to do with the Chaplin's family decision.

Sony wanted MJ to release the single only if the video was shot for nothing, that is to say a live performance.
MJ was scheduled to perform the song in December 1997 in Germany.
MJ cancelled at the last minute, and the thousand of singles already produced was burnt or sent for private collection.

From this day on, Jackson stayed away from Sony and shot only a video in his twelve last years.