Peabo Bryson - All She Wants To Do Is Me

<blockquote class="twitter-tweet" data-lang="en"><p lang="en" dir="ltr">I have lost my dearest friend and creative partner James Ingram to the Celestial Choir. He will always be cherished, loved and remembered for his genius, his love of family and his humanity. I am blessed to have been so close. We will forever speak his name.&#10084;&#65039; <a href="https://t.co/TDJfpbbJWa">pic.twitter.com/TDJfpbbJWa</a></p>&mdash; Debbie Allen (@msdebbieallen) <a href="https://twitter.com/msdebbieallen/status/1090329599244783616?ref_src=twsrc%5Etfw">January 29, 2019</a></blockquote>
<script async src="https://platform.twitter.com/widgets.js" charset="utf-8"></script> 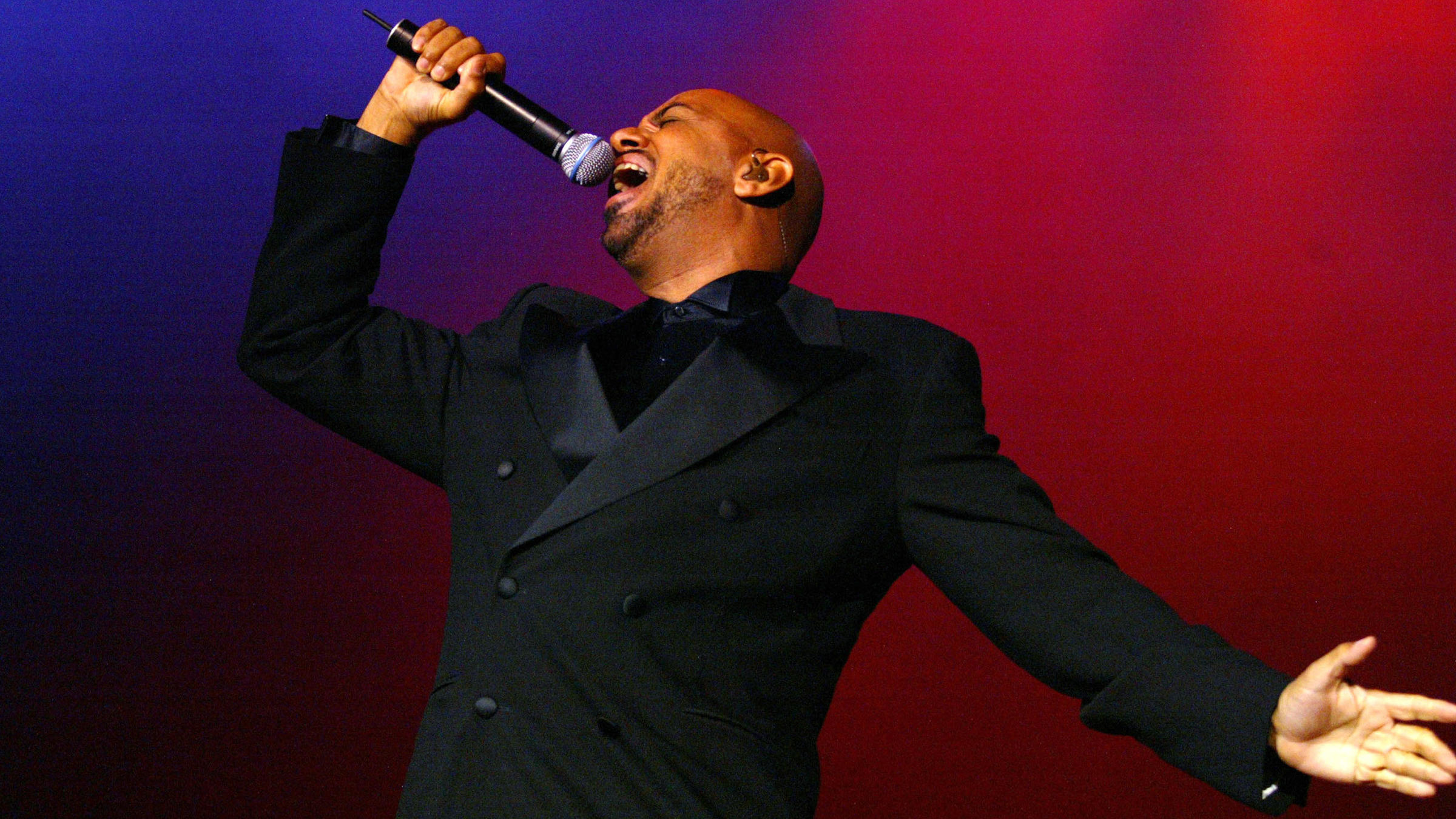 James Ingram, who reportedly died Wednesday at 66, also had his own idiosyncratic loverman signature: a werewolf-at-midnight falsetto howl that he unsparingly deployed throughout his catalogue. You can hear it 33 seconds into 1983's inspirational synth-funk duet with Michael McDonald "Yah Mo B There" (and again at the four-minute mark); it arrives 19 seconds into his 1986 slow jam "Always"; and it's right at the top of 1989's "I Wanna Come Back" (as well as at the 3:35 minute mark ). If Ingram's iconic croon could occasionally become a crutch, it was merely one powerful weapon in his impeccable vocal arsenal. Influenced by gruff-but-burnished singers like Teddy Pendergrass and Michael McDonald, Ingram's sensitive, convicted singing was compassionate yet tough, giving dimension to dignified adult contemporary ballads and lite funk-pop jams.

Though Ingram was a chart mainstay — he placed 19 songs on the Adult Contemporary airplay chart and 18 on the Hot R&B/Hip-Hop Songs chart — he wasn't necessarily a trend-chaser. He was, straight out of the gate, a soulful crooner whose mannered, grown-and-sexy music became a staple of the romantic Quiet Storm R&B radio format, alongside work by artists like Jeffrey Osborne, Luther Vandross, George Benson and Deniece Williams. His collaborations with Patti Austin — 1981's smoky "Baby Come to Me" (which initially stiffed commercially, before rocketing to No. 1 on the pop charts after getting exposure from the soap opera General Hospital) and 1983's wistful, harmonically rich "How Do You Keep The Music Playing" (co-written by Michel Legrand, who also died this week) — helped define sophisticated, urbane, post-disco R&B. Marked by genteel electric pianos, muted synthesizers, chucking funk guitars and elegant basslines, adult contemporary black music in the early '80s served as a soothing palate cleanser, a respite from the harsh effects of the Reagan administration's public policies towards communities of color.

Originally raised in Akron, Ohio, a teenaged Ingram pounded the pavement in '70s Los Angeles, making demos for a publishing company and churning out tunes for his band Revelation Funk, eventually finding his way to playing piano, writing and producing for Ray Charles' record label. Polymath producer-composer Quincy Jones, still fresh off the success of Michael Jackson's 1979 juggernaut Off the Wall, got wind of Ingram's demo for "Just Once," a pleading, soaring pop soul ballad written by Brill Building workhorses Barry Mann and Cynthia Weil. Sensing gold, Jones nabbed the song and its singer for what would become his critically acclaimed, smoother-than-smooth 1981 album The Dude.A breakaway star thanks to that album, Ingram earned a best male R&B performance Grammy and a 1982 Grammy nomination for best new artist.

Remarkably dependable and reliable, Ingram became Quincy Jones' go-to singer-writer, an essential collaborator/fixture in Jones' ten-year blockbuster period (1979-1989), in which he became the music industry's most successful black record producer. Jones and Ingram enjoyed a lifelong creative relationship. In 1982, Quincy Jones enlisted Ingram to rewrite Michael Jackson's mid-tempo groover "P.Y.T. (Pretty Young Thing)" as a bubbly, uptempo funk confection. Given its placement on Thriller, which became one of the most commercially successful albums ever, Ingram received decades of royalty checks that surely allowed him a relative measure of industry freedom. Quincy Jones also produced two of Ingram's 1980s solo albums: 1983's solid It's Your Night and 1986'slackluster Never Felt So Good. Ingram appeared on a slew of other Jones productions, too, including Donna Summer's 1982 Donna Summer, 1985's The Color Purple soundtrack and blockbuster charity single "We are the World"; and as a featured vocalist on all-star, multi-generational boudoir slow jam "The Secret Garden (Sweet Seduction Suite)." Jones even produced Ingram's final studio album, 2008's heartfelt return-to-my-gospel-roots Stand (in the Light).

"When people ask me," Ingram told the Associated Press in 1991, "I say I studied at the University of Ray Charles and went to learn with the master, Quincy."

Throughout his career, Ingram struggled with branding. "The trouble is people hear my songs," he once admitted, "and they say, 'I didn't know you sang it.' " Name recognition wasn't his only struggle. Record labels, in search of crossover nirvana, continually tried to market Ingram to pop radio, hoping to turn him into a mainstream star like Lionel Richie, rather than delivering him to black R&B audiences. Without proper industry promotional support, only a handful of Ingram's singles ended up topping the R&B charts. Despite those Thriller royalty checks, Ingram, caught between conflicting racial imperatives of pop and R&B, sometimes struggled to build a wider audience with his music. In a 1982 interview, he confessed: "It's frustrating at times when I release a record and they tell me it's not black enough for some radio stations ... It's like telling the black audience they're not important, like I'm not interested in them."

Given that he'd jump-started his career as a behind-the-scenes songwriter and keyboardist, before being plucked from obscurity and thrust into the spotlight by Quincy Jones, Ingram never became an otherworldly soul genius in the mold of Al Green or Luther Vandross. Instead, he remained an intrinsically collaborative sideman who just happened to have turned into the choir's featured soloist. Besides his Grammy-winning duet with Michael McDonald on "Yah Mo B There," Ingram won hearts with "Somewhere Out There," his 1987 Peter Asher-produced duet with Linda Ronstadt. (Featured in Don Bluth's animated movie An American Tail, the emotion-tugging power ballad rose to number two on the Billboard Hot 100 chartin 1987 and won the Grammy for song of the year.) Ingram also lent his talents to a range of other albums, including work by The Pointer Sisters and George Benson, as well as Steve Winwood's 1986 Back In The High Life.

Ingram scored his first standalone solo hit in 1990, with the weeper "I Don't Have the Heart," written by Allan Rich and Jud Friedman and produced by Philly pioneer Thom Bell. The lyrics, about a man struggling to admit he's not in the same emotional place as his romantic partner, followed in the footsteps of his earlier 1983 torch song "There's No Easy Way."

A long-married family guy with a full house of kids, Ingram often gravitated to pop material that presented him as a chivalrous, mild-mannered guy honoring his lover (see arch-romantic 1981 The Dude single "100 Hundred Ways"). Reflecting on "I Don't Have the Heart," Ingram once noted to the Evening Sun in 1991: "When I heard it for the first time, a female was singing it ... I thought it would be really nice to hear it from a male's point of view. I thought it would be really beautiful for a man to stand up and be truthful with a woman instead of playing games."

Too often, Ingram's sentimental songs aimed for a generic gentility that could be saccharine and grating. But his convicted, earnest singing still managed to elevate almost any material placed before him.

Ingram greatly benefited from the soundtrack wave of the 1980s — that calculated marriage between record companies and movie studios that yielded slick cross-promotion campaigns and box-office bonanzas. (It also did wonders for artists like Kenny Loggins, The Pointer Sisters, Eddie Money and Christopher Cross). Besides "Somewhere Out There," his Grammy-winning Ronstadt duet from An American Tail, Ingram made contributions to studio film soundtracks like The Color Purple, Beverly Hills Cop II, City Slickers and Wildcats. He won back-to-back best original song Oscar nominations in 1993 and 1994, for co-writing the Dolly Parton duet "The Day I Fall in Love," from Beethoven's 2nd, and Patty Smyth's "Look What Love Has Done," from Junior.

Ingram's singing — somehow simultaneously butter-rich and serrated — opened up space for a generation of pop-soul '80s and '90s singers including Robbie Nevil, Rick Astley, Michael Bolton and Gerald Levert. It also cultivated space for 1990s performer-writers, who oscillated between suave urban R&B and Top 40 pop schmaltz like Brian McKnight and (the endlessly problematic) R. Kelly. Though Ingram once covered Kelly's Space Jam soundtrack fodder "I Believe I Can Fly," the similarities stop there: Ingram's nice-guy aesthetic always aspired to a non-toxic, mutualistic black masculinity. Check out some of Ingram's less appreciated cuts: 1986's "Love's Been Here and Gone," co-written with Marvin Gaye collaborator-mastermind Leon Ware; "What About Me," a 1984 David Foster co-write featuring an unprecedented (and daring) three way pop-country-R&B collaboration between Kenny Rogers and Kim Carnes; 1995's mellifluous, heart-aching Anita-Baker duet "When You Love Someone" from the film Forget Paris; and 2001's "Lean on Me," a resplendent house music collaboration with Masters at Work.

In 1991, Ingram released a greatest hits album called The Power of Great Music. I suspect that title indicates that Ingram himself recognized his high-quality, high-craftmanship recordings — in praise of all things romantic, committed and soulful — would surely constitute his shining legacy even after he left this earth. He was right.
<iframe id="rufous-sandbox" scrolling="no" allowtransparency="true" allowfullscreen="true" style="position: absolute; visibility: hidden; display: none; width: 0px; height: 0px; padding: 0px; border: medium none;" title="Twitter analytics iframe" frameborder="0"></iframe>