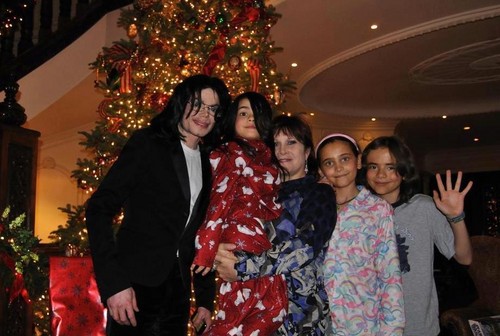 EXCLUSIVE A Michael Jackson movie that will show him as a doting parent in the final years of his life is coming to TV. And the good news is, the producer is someone who knew Jackson well from the beginning of his career, and still reveres him.

Casting notices have gone out for a Lifetime movie based on the book by Jackson&#8217;s bodyguards, Bill Whitfield and Javon Beard. &#8220;Remember The Time: Protecting Michael Jackson In His Final Days,&#8221; was published in 2014 and was pretty much on track about Jackson&#8217;s life after he returned from his self imposed exile abroad in 2006.

The most interesting thing about the casting notice is that the producer of the film is former Motown chief Suzanne DePasse, who worked for Berry Gordy from the late 60s until the company was sold. DePasse literally knows everything about Motown. She was there when the Jackson 5 was discovered, and has maintained excellent relations with the Jackson family and all the Motown acts over the last four decades. She has two Emmy Awards, and three other nominations&#8211; including nods for two highly regarded mini-series about the Temptations and the Jacksons&#8217; rise to fame. The Jackson legacy should be in good hands with DePasse, that&#8217;s for certain. (By coincidence, I just caught that Temps movie on cable last week, and it really holds up!)

I&#8217;m obviously curious about the movie, and Jackson fans will be, too. (DePasse&#8217;s office didn&#8217;t return phone calls yesterday.) But the bodyguards&#8217; book is a good resource for the last couple of years of Jackson&#8217;s life as it shows his struggles to find a new place to live after leaving Neverland, dealing with his mounting financial crisis, and parenting his three young children. There&#8217;s no doubt that Jackson was an excellent father&#8211; just look at those kids seven years after his death. They&#8217;re thriving. He was doing something right without a doubt.

With stuff like this I just don't know how to digest it.. I naturally want to get excited for it but know how south it can go.. soo!
R


KOPV said:
With stuff like this I just don't know how to digest it.. I naturally want to get excited for it but know how south it can go.. soo!
Click to expand...

I like that bodyguard's book a lot. And they seem to be honest guys.
de Passe never said anything negative about MJ as far as I know.
So on the surface I approve this.
But if they get someone like Flex to play MJ then.....

I'm thrilled Suzanne is involved (all of her stuff has been excellent and accurate, with small details changing for drama's sake). But Lifetime has been doing absolutely hideous biopics. Hopefully Suzanne will have total control.

Much rather her than Tavis Smiley's final days movie.
R

It wouldn't hurt if they asked Prince and Paris too. They were old enough to remember
a lot of things during those years. People should see how great he was with his kids.
K

The only reason I will keep an open mind about this project is Suzanne DePasse, she worked on 'Jacksons: An American Dream' which was actually good. We shall see
Last edited: Nov 3, 2016

I'm sure Suzanne DePasse knows what she's doing for the TV film project. With her taking control of the project it's hands down and possibly worth watching.

The thought of anyone playing Michael Jackson makes my stomach turn. The only film I would watch is regards to MJ would be a documentary with actually footage of him. Some people should never be portrayed by actors.
K

I feel the same about seeing someone play Michael but at some point we have to accept the fact it's going to happen.. He's too big of a celeb for films NOT to be made of him..
M

If love Suzanne DePasse, she is very good i love the movie The Jackson An America Dream she was right on she did a beautiful job. If she has control of this i now it will be good. Can't wait to see it.

Im hoping i get casted


Smooth72 said:
The thought of anyone playing Michael Jackson makes my stomach turn. The only film I would watch is regards to MJ would be a documentary with actually footage of him. Some people should never be portrayed by actors.
Click to expand...

OMG, I feel the exact same way!
Casting alone is going to make this cringeworthy.

Edit: I also think it would be pretty boring to have the whole movie about MJ being a parent.
I can understand having that be ONE part/component of a doc about his life, but having a whole doc about him just being a parent, Meh.
I probs wouldn't/won't watch it, and I'm glad it's just going to be a TV only release.
Last edited: Nov 3, 2016
S

No one could make Michael justice, the casting choice for Michael in An American Dream was fine because his adult life wasn't as complex and as controversial as it began to be in the Bad era. I'm all for bio documentaries as it was done with Bob Marley and Amy Winehouse.
K

No one will ever do MJ justice but someone will play him.. over the years I can tell you probably more than 1 person... We already have what 2 bios in work now?

I think the number one person susanne would have chosen wouldve been wylie draper .........r.i.p whylie


8701girl said:
I think the number one person susanne would have chosen wouldve been wylie draper .........r.i.p whylie

Getting someone to fill wylie's shoes is gonna be hard as he was the best actor to play mj imo
Click to expand...

How old was Michael in the bodyguards' book? 48-50?
Suzanne made an excellent choice with Wylie. I hope she does as well this time. So glad SHE'S the one doing this and hope she doesn't disappoint.

I loved the book by Bill and Javon - very honest, enlightening and sweet to read.

I'm wary about this, but I won't give a definitive "NO" until I see the casting.

i'm sure it will be bad, if it happens at all, but oh well, at least this time they picked a decent book.
K

I highly doubt Wylie would have been chosen for this project.. We have no idea where he would have been in his life, how he looked, or his capability to play MJ in that type of feel.. The role of MJ in the 80's on American Dream was not an indepth look into the mind of Michael.. It takes a different type of acting and thought process to portray the mentality of a person instead of sectional moments.. (burn/Motown 25/ little studio moments/victory on stage)..

In my personal opinion the only person I can see do a 50% at least is E'cas.. Him on blossom for example was a little glimpse of him capturing MJ a little.

Sent from my HTC_PN071 using Tapatalk

Their all jumping on the bandwagon.
K