I feel that we focus so much on Michael solo success that we at times forget that The Jacksons also made some great albums. So what is your favourite Jacksons album? Im talking Jacksons, not Jackson 5.

Personally I think its Triumph. I love this album just about as much as I love Off The Wall and Thriller. I may even go as far as to say that I prefer Triumph to Off The Wall. Every song on this album is great and Michael's vocals are incredible. Its simply brilliant.

You have Can You Feel it which is powerful and motviational, Lovely One which is a great dance track and one of my personal favourite Jacksons song's.

'You Way's' and 'Everybody' are also both great songs, Heartbreak Hotel is so haunting and powerful. I remember first hearing it, it was late at night and I was in the middle of the countryside in the back of a car with my earphones in, I fell in love with it at that point.

Time Waits For No One is a beautiful song which is so often overlooked, Michael had such a beautiful voice and it compliments this song so well. Simply beautiful.

Walk Right Now is 6 and a half minutes of brilliance. It is one of those songs that takes you on a journey, there are so many interesting little things about this song that just keep coming. Just sit back and listen to this and appreciate the awesome musicianship.

Give it up is similar to Your Ways in the way that is a dance song but sort of beautiful at the same time, it is quite hard to explain.

Wondering Who is a great dance song to end the album featuring Jackie on lead vocals who did fit this song perfectly, while Michael did backing vocals. Another great song.

Destiny is my favourite Jacksons album, all of the songs on it are brilliant in my opinion, there's not one track which I don't particularly like.

Great thread. I'd say my favorite is Triumph with Goin' Places being a close second. When the Jackson 5 became the Jacksons they were doing amazing stuff.

really hard, I chose Destiny although I think my other favorite was Victory

That's a difficult one! I think I have to go with Destiny.

Destiny and Triumph are both great

Definitely Triumph. It's like the precursor to Thriller in spirit and one of the most listened to MJ albums in my collection no doubt. I probably listen to it even more than Off The Wall, Dangerous, and HIStory combined.

Edit: Just went back and read LTD's post that started this thread and I have to say I totally agree all of that.

Destiny is for me their best album, even though i really like Triumph and Goin Places to. I just simply love Destiny and listen to it whenever i got a chance. Thumbs up from me to Destiny

i really like triumph, but not as much as off the wall, etc.
I accidantally voted for destiny

I jest. Triumph is their best album in my opinion.

Triumph for me...I'm lovin' 'Your Ways' atm..totally funky and Michael's vocals are amazing!..:wub:

Destiny for me... But Triumph is just right after it

Ohhh triumph is such an awesome album! I had to buy it all over again haha

I voted for Destiny, but I love this one and The Jacksons equally.

My favourite is Triumph. So many amazing songs! My favourites being This Place Hotel, Wondering Who and Can You Feel It. :heart:

L.T.D said:
I feel that we focus so much on Michael solo success that we at times forget that The Jacksons also made some great albums. So what is your favourite Jacksons album? Im talking Jacksons, not Jackson 5.
Click to expand... 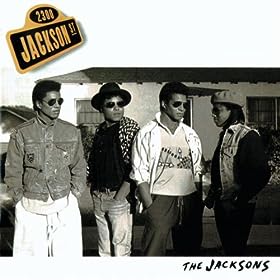 Who are the four people who voted for Victory? That album sucks.

destiny followed by triumph and goin places. like all the gamble and huff era albums. the jacksons going places etc

For me it's a tie between Triumph and Destiny.

Triumph.I love Give it up!

MattyJam said:
Who are the four people who voted for Victory? That album sucks.
Click to expand...


I wouldn't go that far. It has some gems - Be Not Always, Wait, Torture and State of Shock.. all the songs that feature Michael actually. Randy's One More Chance is alright too.

Triumph is my favourite though. Almost every song on that album is great. Triumph almost tops Thriller in my opinion. It's such a great shame it gets almost no recognition.

Triumph is my favourite, but Destiny has it's charm. I love Michael's autobiographical stories in songs like Bless His Soul and That's What You Get (For Being Polite).

MattyJam said:
Who are the four people who voted for Victory? That album sucks.
Click to expand...

I agree, I think that when we listen to Triumph or Destiny, 2 LP's that never get old, it's impossible to love Victory more that Triumph an Destiny...

Thanks to Destiny and Triumph I can explain why MJ is a Genius even without Quincy Jones!